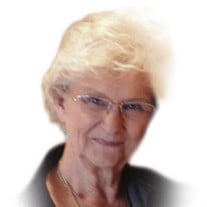 Garden City, Utah - Jaunice Holloway peacefully passed away June 1st, 2015 surrounded by her loved ones at the age of 79. Jaunice was born on July 31, 1935 in Brigham City, Utah to Lois Floyd and Thomas Johnson. She eventually moved to Montpelier, Idaho. At the age of 22, she met and married the love of her life, James Samuel Holloway. Together they built a life and had 5 children. With James being in the military, they were stationed in Italy for 2 years, which they spoke of often. After retiring from 20 years in the Military, they ran a dairy farm in West Valley City, Utah for years and eventually retiring and moving to Garden City, Utah, where they lived for 25 years. Jaunice was truly a one of a kind person. She loved all of her family, children, and grandchildren, unconditionally. She would give the shirt off her back, to anyone who needed it. She was constantly thinking of others and always had a trick up her sleeve for making someone's day. Her smile and laughter was bright enough to light a dark room and you couldn't help but long to be around her beautiful personality. She gave comfort and love to her family and to others around her. Some of Jaunice's favorite things were; shopping, Mexican food, spending time with her family, and of course her Coca-Cola. She will be missed deeply. She is survived by her five daughters, Jayme Chu, Jodi Seaver (Rob), Jackie Sereika (Phillip), Jana Holloway, Jeri Holloway, and nine grandchildren. She is also survived by her sister, LaRae Johnson, and her brother, Leon Johnson. She was preceded in death by her husband, James Holloway, her parents, Thomas and Lois Johnson, a sister Veda Hoff, and brothers Tommy and Leonard Johnson. Funeral services will be held at 1:00 PM on Friday, June 5, 2015 in Garden City Ward Chapel. A viewing will be held prior to the services at the church from 12:00 to 12:45 PM. Interment will be in the Garden City Cemetery. Condolences may be sent to the family at www.nelsonfuneralhome.com

Garden City, Utah - Jaunice Holloway peacefully passed away June 1st, 2015 surrounded by her loved ones at the age of 79. Jaunice was born on July 31, 1935 in Brigham City, Utah to Lois Floyd and Thomas Johnson. She eventually moved to Montpelier,... View Obituary & Service Information

The family of Jaunice Holloway created this Life Tributes page to make it easy to share your memories.

Send flowers to the Holloway family.