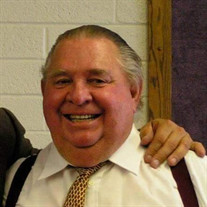 Jay B Karren, 83 11/12 years old, passed away when his heart plumb gave out on Sunday, November 24, 2019. He was surrounded by family. First child of Bert Ernest and Edris Cook Karren on December 22, 1935 in a family home in Naples, Utah. Jay’s family moved to wherever his father was able to find work. He changed schools three times in first grade. Frustrated with his dad’s drinking he would pour out all the alcohol and once peed in the beer before giving it to his dad. They finally settled into a 16x16 log cabin in Naples, Utah. It looked more like a shack with no electricity or plumbing. His bedroom was a tent with a wood burning stove behind the cabin until graduating from high school. Winters meant piling on blankets until he couldn’t move. He earned top grades in school, lettering in physics, chemistry, and math. A teacher recognized his potential and encouraged Jay to continue his education. He supplemented his family’s income by raising rabbits. Jay served honorably in the National Guard as a field radio specialist in Provo, Utah, while attending Brigham Young University. His maternal grandmother, Alice Cook, influenced his faith and dedication to family history and the gospel. While serving in the West Central States mission for The Church or Jesus Christ of Latter-day Saints in the mid 1950s he met a 15 year old investigator named, Sally Westgard. They wrote letters for four years until she was baptized against her parent’s wishes. Feeling unable to return home from college, she called Jay and he invited her to Utah. She lived with Jay’s Aunt Mabel Smith while they courted. He sold his silver dollar collection to buy a ring. They were married September 7, 1960 in the Salt Lake City LDS temple. Jay was a skinny little guy and Sally looked beautiful in her dress from the turkey farm. Living in Provo, they welcomed their first child, Robby. He sold his Model A Ford for $100 for 1 quarter of tuition. Jay graduated with undergraduate degrees in biology and zoology. He moved his family to Kansas and welcomed a tiny girl, Weezy, an eager boy Rodger Dodger, and a chubby girl, Wally. He earned both a Master’s and Doctorate degree from University of Kanas in Entomology, right around the time some guy landed on the moon. That same year Jay moved his family to Virginia. There they were integral in finding local members of the church and organizing a branch. He taught at Radford Girls College. They welcomed two more daughters a sweet red headed, Yanny and a sparkley hazel-eyed, Netty. In 1975, with a new baby and two weeks before Christmas he moved his wife and 6 children cross country to Utah. First to Ogden working at the US Forestry Service and soon after to Price working as a County Extension Agent. Utah State University recognized his expertise and offered him a promotion as Adjunct Professor and State Extension Entomologist. In 1977 Jay settled his family in Smithfield, Utah. There he welcomed a curly haired boy, Wicky Mouth, and a happy determined girl, Yeesa. He learned of an opportunity to work with USAID in Mogadishu, Somalia encouraged by Sally he applied. They were accepted for a two year term and then had to discover where in the world is Somalia. While there they welcomed their ninth and final child a sweet baby girl he called his Little White African. After 31 years, Jay B retired from Utah State. He loved collecting and identify insects with 4-H kids. Jay regularly traveled the state, country, and even the world improving crop production. He introduced innovations in natural pest control and individualized help for farmers and companies. He was the authority on true bugs, he knew the farmers by name, they trusted and respected him. He caught, identified, pinned, and discovered innumerable insects whom we are sure have all been waiting for a chance to settle the score. He worked tirelessly throughout his life doing Family History. He served faithfully in the church and never missing a month of Home Teaching. He served a two year mission with his sweetheart in the Chile Santiago East Mission. He didn’t stop until the work was done. He worked hard and always believed hard work would solve any problem. He helped provide for his mother and others whom he loved dearly. He is survived by his wife Sarah Averill Westgard Karren (Smithfield), Children; Robert Lynn (Janet) Karren of Elwood, UT, Louise Karren of Smithfield, UT, Roger Lewis (Suzanne) Karren of River Heights, UT, Lori (Bennett) Keller of Hyde Park, UT, Leighann (Jamie) Marutz of Black Diamond, WA, Lynette (Randon) Chesnut of Ammon, ID, Richard Lawrence (Melissa) Karren of Palm Harbor FL, Lisa (Andrew) Robanske of Smithfield, UT, and Lorna (Ryan) Christensen of Belgrade, WA, 32 grandkids and four great grandkids. He is preceded in death by his parents, his brother and sister-in-law Lee and Charma Karrren, brother-in-law Max Harrison, and granddaughter Emma Robanske. Funeral services will be held Saturday, Nov. 30 at 10:30 a.m. with a viewing from 9-10 a.m. at the Smithfield 14th Ward Chapel (451 S. 250 East). A viewing will be held Friday from 6-8 p.m. at Nelson Funeral Home (162 E. 400 North). Interment will follow at the Smithfield Cemetery. Condolences & memories may be shared online at www.nelsonfuneralhome.com

The family of Jay B Karren created this Life Tributes page to make it easy to share your memories.

Send flowers to the Karren family.