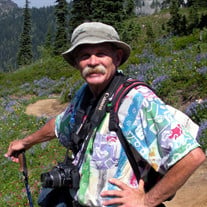 Jeffrey Robert Allan, Aug. 10, 1953 – Jun. 12, 2016, son of Barbara L. Allan and Robert E. Allan (Carrie), husband of Jennifer L. Hoffmann passed away at his home in Logan, Utah. His family moved to Pullman, Washington in 1957. He graduated from Pullman High School in 1971. He left Pullman soon after graduating to seek his fortune working in various endeavors. Most of Jeffrey's knowledge and skills were acquired on his own. He taught himself computer programming, mastering it so proficiently that he taught computer programming at the college level. For a major part of his working career he was the head programmer for the world's largest hop company. Jeff enjoyed being with his family and friends. We all had many great times with him. Jeff organized hikes on the Pacific Crest Trail, floating on inner tubes down the Yakima River, tent camping in the Cascades, Priest Lake and many other great places. No one could build a campfire like Jeff or make camp food that tasted so good. Jeff gained his love of the outdoors growing up & hiking the many trails near Yakima Wa. His love for photography and geology continued after moving to Logan. With his wife & soul-mate Jennifer, they enjoyed hiking, skiing, camping & canoeing. In 2001 Jeffrey united with his true love and soulmate, Jennifer Hoffmann. They had been childhood friends in Pullman. The Allan and Hoffmann families skied & camped together many years. Jeff wasted little time moving from Yakima to Logan to be with Jennifer. They spent their free time hiking, camping, canoeing and skiing together with Jennifer’s brother Allen at Beaver Mountain. Jeffrey enjoyed many interests including stamp and rare coin collections. He loved music, attended many concerts with his daughter, Jessica and collected numerous CD's as well as vinyl records of his favorite music. He loved wearing tye-dyed, Golden Dragon & other very cool t-shirts; it was his signature look. Jeff was a skilled photographer. His favorite subjects were wild flowers, old crumbling barns, and nature in general. Jeff enjoyed conversation. We never tired hearing about the good and the not-so-good experiences of his life. His Irish Grandmother said that Jeff had truly "Kissed the Blarney Stone." Jeff is survived by his wife Jennifer, father, mother, step mother, daughter Jessica Schlaman (Travis), step-daughter Sarah Umburger, sister Robin, brothers Patrick (Janet) and Scott (Teresa), five grandchildren, many fine friends and of course, their cat Fritz. Condolences may be shared with the family at www.NelsonFuneralHome.com. A Celebration of Life will be held August 13th and 14th in Logan, UT. Jeffrey was one of a kind, we miss him dearly and will always hold his memory close to our hearts.

The family of Jeffrey Robert Allan created this Life Tributes page to make it easy to share your memories.

Send flowers to the Allan family.