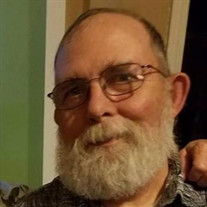 Our beloved husband, brother, father and grandfather passed through the veil January 19th, 2022 due to complications from Covid. Jerry was born December, 9th, 1950 in Boron, California and was the youngest of seven siblings and several much older half-siblings. He graduated from Granada High School in 1969. He met Sherlean Talbot while visiting his sister and thus began their great love affair that spanned over 54 years. Jerry and Sherlean civilly married in 1975 and, in 1983, were sealed in the Salt Lake Temple for Time and All Eternity. Jerry enjoyed his many callings in the church and spent many happy years as ward librarian. His favorite calling being that of Scout Leader when his sons were young. Jerry was proud of his 33 years at Thermo-Fisher Scientific and retired from there in 2016. Five years later, they still have a large photo of him on their breakroom fridge. He loved camping with his family and visiting many National Parks. He especially loved Blackfort Camping Ground and the many family reunions held there. He enjoyed giving counsel to others as a Brother, Dad, or good friend. He was kind and loving to all who knew him and he treated all his pets as his buddy or princess, calling himself 'daddy' to them. He knew Sherlean's secret hiding places for candy bars. We would laugh as they bickered back and forth over who ate the last piece. Sherlean could not hide candy from him because he had the nose of a blood hound. He loved having Zoom calls from his kids and always talked about how each one of them are amazing. He was quick to give help to his children in their needs wherever his health allowed him to do so. He always talked about each of his grandchildren and how much they meant to him. They were his precious treasures. Jerry is survived by his wife, Sherlean Talbot Collier; His four children: Rebecca Lonkert - Apache Junction, Arizona; Jennifer (Janus) Van Dam - Payson, Utah; Jeremy (Emily) Collier - Logan, Utah; Jacob (Maren, deceased) Collier - Vernal, Utah; and eight grand-children. He is also survived by his sister, Mary Gunther; his brother, John Collier; his brother-in-law, Larry (Relia) Talbot; his sister-in-law Cheryle (Vince) Gonzales; and his sister-in-law, Tami (Barry, deceased) Sasseen. Jerry was preceded in death by both his parents, five of his siblings and a precious daughter-in-law. Both viewing and funeral services will be held at Nelson Funeral Home located 162 East 400 North, Logan, Utah. A viewing will be held from 6:00-8:00 PM on Monday January 24. Funeral services will be at 11:00am on Tuesday January 25. Preceded by a viewing from 9:30 - 10:30am. Jerry will be Interred in Hyrum Cemetery thereafter. We dearly love you, Jerry. We will miss you enormously. May your love for each of us reach through and provide comfort. You left us a legacy of lessons and memories that will last us until we meet again.

Our beloved husband, brother, father and grandfather passed through the veil January 19th, 2022 due to complications from Covid. Jerry was born December, 9th, 1950 in Boron, California and was the youngest of seven siblings and several much... View Obituary & Service Information

The family of Jerry Ellis Collier created this Life Tributes page to make it easy to share your memories.

Our beloved husband, brother, father and grandfather passed through...

Send flowers to the Collier family.