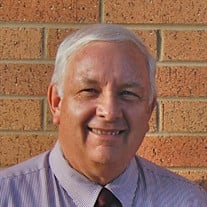 Jerry Lee Thain passed peacefully in his home with family on April 12, 2022. He was born February 8, 1944 to Paull Marvin and Thail Thain in Logan, UT. Jerry grew up in Benson, UT on the Thain Dairy Farm where he learned to work hard and keep things clean and organized. While living on the farm he learned to milk and feed the cows, drive the tractors, plow/harvest the fields, and work the farm with his family. He learned many other great traits he carried on through his life. One of his favorite memories he has of the farm was building a go-cart from scraps and parts from farm equipment with his Dad and grandpa, Daddy Marvin. Jerry enjoyed his time on the farm, but his love for music was deeply engrained that he left the farm to pursue his passion. Jerry started school in 1963 at USU. He then decided to serve a mission for the Church of Jesus Christ of Latter-day Saints for 2 yrs (1964-1966), and was called to serve in the Central British Mission where he grew a love for the people of England and Wales. He would end his letters to home with “Cheerio, Jerry” instead of “Love, Jerry.” After his mission, he returned to school, where he graduated in Business Personnel Management and Economics in 1968. Shortly after he graduated, he was then drafted for the Army and served in Saigon, Vietnam. He served his country and returned in March of 1970. July of that same year Jerry met his beautiful bride and the love of his life JoAnn Chapman from Nephi, UT. They met at a USU singles ward dance. Together they served in their separate ward callings to plan activities. They started dating, and have been planning parties together ever since. They were engaged on Valentine’s day in 1971, and chose to be married in the Manti, UT Temple, on June 11, 1971. The couple celebrated their 50th wedding anniversary last year on June 11, 2021. Jerry managed Keith Jorgensen Magnavox for many years where his love for music grew. He then decided to open his own business and store, “Music Emporium” in 1995. There he connected with others that shared his love for music. He sold organs, pianos, Clavinovas, sheet music, etc. He hosted many recitals in his store. He loved watching and thoroughly enjoyed the impact music had on others. Anytime he was out and about and there was an organ or piano in sight he could always be found near. He enjoyed teaching others, especially his children about the different pipes and sounds from the organ. He made the organ come alive as he played with great feeling, as he incorporated the variety of tones and sounds. We loved listening to him play. We’re grateful for the music he brought to our family even if it was at 11:30 pm or 6:00 am. Jerry and JoAnn served as Guest Service Missionaries at Temple Square from February 2014 to February 2017. Serving as guest missionaries was a very memorable and great experience for him. He also served in many church callings. Jerry could fix almost anything and he kept all of his ‘toys’ in good condition. His motto was ‘leave it better than you found it’. And if you didn’t it was ‘rude, crude and inconsiderate.’ Jerry took great pride in his home and also had a green thumb, with a beautiful garden and lawn. He also loved the outdoors. He took his family on many adventures, camping, 4-wheeling, snowmobiling, hiking, and traveling across the states to see the many wonders of the world. Jerry loved the national parks and had a great appreciation for nature. While raising his family, his second home was in the mountains on his snowmobile, or on his 4-wheeler. He referred to his time in the mountains as ‘therapy’. He was well known for his continued service for others. He frequently went out of his way to shovel snow, move, and use his big piano trailer to help neighbors when they needed a hand. His two greatest loves were his family and the gospel of Jesus Christ He leaves behind his adored wife JoAnn Chapman Thain, his 8 children; Travis (Sharla) Thain, Heather (Jason) Haycock, Christy (Matt) Daum, Tammy, Shauna (Ben) Byington, Melissa (Brett) Fisher, Amy (Jody) Jackson, Aleece (Chaz) Ricks. His 27 grandchildren; Jocelyn (Jordan), Breanna, Tanner, Madysen, Austin (Kira), Dylan, Hailey, Savannah, Grace, Keziah, Brooklyn, Kaleb, Jaxton, Cole, Addie, Cash, Mia, Tayson, Tylie, Crew, Ridge, Kayden, Mykel, Ryker, Wyatt, Avery, and Indy. Along with his sister-in-law Lori (late Kay Paull) Thain, sister Marcia (Richard) Nelson, brother Danny (Rosalee) Thain. We will miss the music he has shared and brought into our lives, but we’re happy he can play his songs and share the music to the heavenly choirs above. Services are under the direction of Nelson Funeral Home. The services will be held at the Smithfield South Stake Center at 451 South 250 East Smithfield, UT. A viewing will be held on Monday, April 18, 2022 6-8pm, and Tuesday, April 19, 2022 from 9:30am-10:30am. The funeral will follow on Tuesday, April 19, 2022 at 11am with the graveside service to follow immediately after at the Smithfield Cemetery. Funeral zoom (Password "Jerry"): https://us02web.zoom.us/j/86473886669?pwd=RHlTQXJsYUhUUzJlSGlDV1l0cGtZQT09

Jerry Lee Thain passed peacefully in his home with family on April 12, 2022. He was born February 8, 1944 to Paull Marvin and Thail Thain in Logan, UT. Jerry grew up in Benson, UT on the Thain Dairy Farm where he learned to work hard and keep... View Obituary & Service Information

Jerry Lee Thain passed peacefully in his home with family on...

Send flowers to the Thain family.