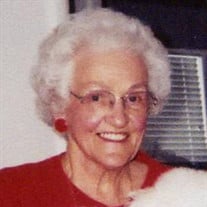 Joan Gubler Gyllenskog Obituary Joan Gubler Gyllenskog, age 90, passed away peacefully Oct. 11, 2015 at the Sunshine Terrace in Logan. She was born Dec. 21, 1924 in Paris, Idaho to Robert Ernest and Belle Emeline Stocker Gubler. She married Lyndon LeRoy Gyllenskog on Dec. 20, 1947. Joan and Roy had one child. Roy proceeded her in death on Aug. 29, 1975. She attended school in Paris, Idaho. She spent her high school summers selling magazines in the American southeast with her sister Anna and husband, Eddy Hollen. After graduating from Fielding High in 1943 she set out on a patriotic adventure to Seattle where she became a riveter for Boeing Aircraft assembling warplanes during WWII. Eventually, as dad became ill and later disabled she became a seamstress, for many years, with the Mode O’ Day Corp. During her retirement years, she enjoyed volunteering at Logan Regional Hospital with newborns. She enjoyed tole painting, creating beautiful porcelain dolls, and keeping a beautiful yard. She was an active member of the LDS church, held many early callings and eventually had dad sealed to her in the Temple. Even in her later years, suffering severely from dementia, she attended services every Sunday. Joan is survived by her son, Lee and his two children Dane, Logan, Nicole (Mark) Alldredge, Boise, Idaho: and one great grandchild. She is also survived by one brother, Jay (Evelyn) Gubler of Woodland Hills, Utah. Graveside services will be held at the Smithfield Cemetery, 300 E Center, Saturday, October 17 at 12 noon.

The family of Joan Gubler Gyllenskog created this Life Tributes page to make it easy to share your memories.

Send flowers to the Gyllenskog family.