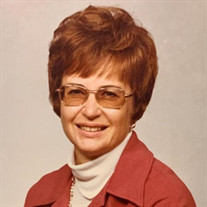 Jo Ann Garrett Peterson, 89, passed away on May 8, 2020 in Visalia, California. Jo Ann was born April 24, 1931 in Salt Lake City, Utah to Leon Desmoin Garrett and Hazel Armeda Jorgensen Garrett. She had three older brothers: Jay, Sherman, and Wilson Garrett. They have all preceded her in death. Jo Ann was born in Salt Lake City but grew up in Logan, Utah. As a senior in high school, she was a class officer and was also voted Prom Queen. She met Wes Peterson on a blind date while she was in high school and he was a student at Utah State University. Jo Ann wrote to Wes while he was deployed to Hawaii at the end of World War II. They were married on June 6, 1951, while both were students at the University of Utah. They were married in the Logan Temple of the Church of Jesus Christ of Latter-Day Saints. After living and working in Logan, they decided to take their first child, a daughter named Teri, and move to Everett, Washington. Jo Ann worked as did Wes making a living and a life together. Another job move found them farther down the West Coast in Richmond, California where another daughter was born, Debi. Wes decided to change careers and attend Dental School at the University of California in San Francisco. Jo Ann worked at the Glidden Paint Company as a secretary to one of the managers during this time. They then moved to Modesto, California where two sons were born, Todd and Mark. Jo Ann was done working to help support the family at this time. She developed many talents and hobbies. Her great passion was her painting in oil and acrylic. Many of her paintings hang in each of her family members’ homes. She was a great cook. She will be remembered for her cinnamon rolls. She loved to sew, especially quilting. She also was very talented in Brazilian Embroidery. She served in many church callings. She loved to teach. She taught four years of early morning Seminary besides many Primary and Sunday School Classes. She also enjoyed sharing the things she was blessed with. She helped many family members of her Ward who were going through rough times. Jo Ann and Wes moved to Wellsville in 2001-2013. They loved living in Wellsville. They then moved to Visalia to be near their boys. She is survived by her four children, 13 grandchildren and 19 great grandchildren. Jo Ann was preceded in death by her parents and siblings, a granddaughter and a grandson. We will remember her lovingly.

The family of JoAnn Garrett Peterson created this Life Tributes page to make it easy to share your memories.