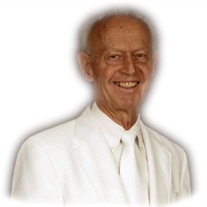 John Harold Heaton, "Hal," age 84, passed away Tuesday, December 6, 2016 in Smithfield Utah. Hal was born on July 30, 1932 in Ogden Utah, to Elvie and Pearl Heaton. He grew up in Logan, Utah with his sisters, Ruth Anne Heaton Everton and Mary Lynne Heaton Nelson. He graduated from Logan High school and Utah State University. Hal served a mission for the LDS church in the Eastern States, and later served in the Malta, Italy mission with his wife, Jackie. Due to political tensions, they finished their mission in Dallas, Texas. He also served in the US Army during the Korean conflict. He is the father of Dawn, John, Michael, and Michele, and stepfather to Randy and Lori. He was a successful businessman and served faithfully in various leadership positions in the LDS church. He is survived by his wife Jackie, his children Dawn (Wendall) Pelham, John (Rebecca) Heaton, Michael (Mindy) Heaton, and Michele (Alain Godbout) Heaton. He is survived by 21 grandchildren and 5 great-grandchildren. Hal was preceded in death by his sister, Ruth Anne Heaton Everton, and his grandson, Alex Pelham. The funeral will be held Saturday, December 17, 2016 at 11:00 AM at the LDS church located on 451 South, 250 East, Smithfield, UT. The funeral services are being arranged by Nelson funeral home.

The family of John Harold Heaton created this Life Tributes page to make it easy to share your memories.

Send flowers to the Heaton family.