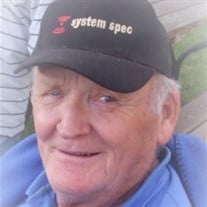 John Boyd Jenkins, son of Lorran Amos Jenkins and Margaret May Johnson, was born Feb. 26, 1931, in Talmage Idaho. He was the youngest of seven siblings, four brothers, Clyde, Elden, Cyril, and Clarke, and two sisters, Afton and Veda Mae, all who preceded him in death. He married his high school sweetheart, Lu Jean Hogan, on Sept. 18, 1953, sealed for time and eternity in the Salt Lake Temple. John Boyd graduated from Utah State with a BS degree in physical education in 1953, and a Master’s degree in education from Whittier College in 1968. He served in the Air Force during the Korean conflict as a 2nd Lt., stationed at Parks AFB in the San Francisco area. They moved to Garden Grove, CA in 1960 where John Boyd taught school for 35 years and worked as a recreation director for the city of Garden Grove for 50 years. Every summer John Boyd and family returned to Grace to work and manage his wheat farm. They were blessed with 3 children, Jennifer Jean Bearden, John Robert Jenkins, and Margaret Allyson Hahn. John Boyd has 10 grandchildren and 10 great grandchildren, one of whom preceded his great grandpa in death. John Boyd loved to travel, loved fishing, and was an avid fan of all sports. He passed away swiftly and peacefully due to complications of a stroke suffered 17 months previously. He died at the age of 85 on July 9, 2016.

The family of John Boyd Jenkins created this Life Tributes page to make it easy to share your memories.

Send flowers to the Jenkins family.