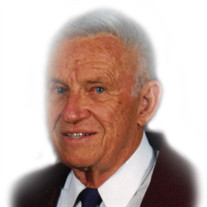 Logan, Utah - At dawn, June 15, 2015, Lt Col John Burton Millard (ret.), taxied out onto the tarmac, was cleared for takeoff, brought his engines to full throttle and roared up into the heavens on his thirty sixth… and final mission. He slipped the bounds of earth with grace, with dignity and most of all with his great charm and humor intact: Joking about the “adventure” of changing hospital rooms, telling us he loved us, and wishing gently, “Toodeloo.” Burt was born March 13, 1920 in Preston, Idaho to Oliver Edwin Millard and Marinda Larsen Millard. In 1924 the Millard family moved to Logan, Utah. Burt attended Logan City Schools. He married Beth Price, with whom he had 4 children. After the marriage dissolved, he married Jane Thomas with whom he spent many happy years until her death. In 1989, he married Alma Morris Clark. In 1940, along with his studies in engineering, Burt enrolled in the U.S. Army Reserve Officer Training Corps at Utah State University. With the war underway, he put education on hold and commissioned in the US Army Air Corps. In 1941 Burt took his first training flight in a Cub J-3-L, which had a maximum speed of 81 MPH. In September, 1944, Lt. Millard flew a B-17 Flying Fortress from Lincoln, Nebraska to Great Ashfield Air Base in Wales, England, via Maine and Newfoundland as one of twelve replacement airplanes for a squadron who had lost a third of its aircraft and crews in the previous bombing mission. Burt’s combat service began October 1, 1944, and ended with his last mission on March 30, 1945. During this time he saw the terror of war and remembered seeing one of the first German jet fighters shoot down a number of American planes in the span of two or three minutes. In another raid, Burt saw three of the four planes in his formation (his being the fourth) get shot down around him. He and his crew completed 35 missions over heavily fortified targets. WWII defined and tempered Burt’s character and after the service he went on to live an American life. After returning home, Burt completed his Bachelor of Science degree in Mechanical Engineering at Utah State University. He worked in the construction business for a time. Later, he became a metallurgical engineer at what is now ATK where he helped develop nozzle and ignition technologies used on rockets and the Space Shuttle boosters. Burt was a dedicated father and loved to spend time in the great outdoors. Gardening, fishing, hunting, snow skiing at Beaver Mountain and square dancing were activities Burt enjoyed well into his 80’s. One of his all-time favorite places to hang out was the Royal Bakery with good friend Bob Rust. After retirement from ATK, Burt’s passion for square dancing took him and Alma around the globe to participate in many square dancing activities. Burt always had a beloved dog companion. Some may remember seeing him on his daily walks with “Charlie.” Most recently, he enjoyed the companionship of “Tootsie” the family cat. Giving back to the community was always a priority for Burt. He served as a volunteer driver for the Logan Senior Citizen Center and Sunshine Terrace and was an avid supporter of the Utah State University, College of Engineering. Burt is preceded in death by his parents Oliver and Mirinda, brother Edwin Dean and wife Jane. His survivors include his wife Alma, and children, John (Karen), Steve, Tom and Janet (Gary) Harris, Step-children, Bill (Sharon) Bickmore, Steve (Thea) Clark, Brent (Debbie) Clark, Stephanie (Roy) Sorenson, Susan Gangier, and Liz (Mike) Hill, Dave Perry, Craig Perry and partner Carol Flynn Perry and many grandchildren and great-grandchildren. Graveside service and military honors will be held at 11:00 AM, Thursday, June 25, 2015, at Logan City Cemetery. The family thanks Sunshine Terrace Home Health Care staff who cared for him during the last months of his life. Their excellent care enabled him to live at home until his passing. The family also wishes to thank the caring doctors and staff at Logan Regional Hospital for the great care he received prior to his passing. Considering Burt’s passion for giving back, in lieu of flowers, please donate to your favorite charity.

Logan, Utah - At dawn, June 15, 2015, Lt Col John Burton Millard (ret.), taxied out onto the tarmac, was cleared for takeoff, brought his engines to full throttle and roared up into the heavens on his thirty sixth&#8230; and final mission.... View Obituary & Service Information

The family of John Burton Millard created this Life Tributes page to make it easy to share your memories.

Send flowers to the Millard family.