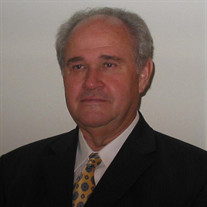 John Dale Slater passed away on September 30, 2019. John was born August 5, 1947 in Ogden, Utah to Nevada Pearl Wardle and Raymond (Bill) LaVell Slater. He was their fifth and last child. John grew up in Marriott, Utah and spent his boyhood roaming the fields on his trusted steed “Stormy” with his dog “Ears” by his side. John graduated from Weber High School. He served a mission to Niue and always dreamed of returning to the island that he loved. After his mission, John served in the Army Reserves. After completion of service, John attended Weber College where he met his eternal sweetheart, Marcia Lynn Toller of Ogden, Utah. The two were married in the Ogden Utah Temple on August 10, 1972. Together, they raised five children. The most important things in John’s life were the Gospel of Jesus Christ and his friends and family. Whatever calling was extended to John, he accepted and served with his whole heart. Friends were family in John’s eye and nothing gave him greater pleasure than to have neighbors and friends to visit with and to share stories of the past. His family was never left in doubt of the love he had for them. Whether it was camping in the Greys River Valley or having the family gather for their weekly Sunday dinner, he loved being with his family. John was preceded in his death by his parents, Bill and Nevada Slater and his two brothers, Keith and Myrl. He is survived by his wife Marcia, his daughters, Jonni, Sara, Casi (Lane), Marissa (Scott) and his son Josh (Candace), his sister Gwen Rhodes and his brother Raymond Doyle Slater and his seven grandchildren. Services will be held at the Hyrum North Stake Center Chapel at 245 Apple Drive, Hyrum, UT 84319 on Friday, October 4 at 11 am. Viewings will be held at the same location Thursday, October 3 from 6:00 p.m. to 8:00 pm & Friday from 9:30 a.m. to 10:30 a.m. Interment will follow at Hyrum Cemetery. Condolences & memories may be shared at www.nelsonfuneralhome.com

John Dale Slater passed away on September 30, 2019. John was born August 5, 1947 in Ogden, Utah to Nevada Pearl Wardle and Raymond (Bill) LaVell Slater. He was their fifth and last child. John grew up in Marriott, Utah and spent his boyhood... View Obituary & Service Information

The family of John Dale Slater created this Life Tributes page to make it easy to share your memories.