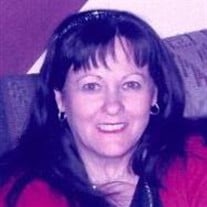 Joy Ann Holman Hull, June 1, 1955, passed away in Hyde Park, UT on May 6, 2018. Our loving wife, mum, grandmother, and sister, returned to Heavenly Father on Sunday. Awaiting her is her mother, father, and younger brother Jimmy. Ann was born into a working class family of six children in Brisbane, Australia. Life was tough, but they had a lot of fun growing up. She was an active member of the Church of Jesus Christ of Latter-day Saints, She enjoyed wildlife, and as a child, she wore live bearded dragons as broaches to church. She learned to work hard and put herself through college by working as a seamstress and as a bank teller. She attended the Church College in New Zealand and later Rick’s College (BYU Idaho). She met her husband, Larry, while attending college in the 70’s. When they met, she was sporting a white and brown-striped shirt and orange pants, and had a bubbly personality and a lovely Aussie accent that he couldn’t get enough of, he was hooked. They were married in the Idaho Falls Temple in November 1975. They had 8 children whom she loved very much. They made their home in Cache Valley, where she was a self-taught carpenter, electrician, mechanic, plumber and seamstress. Once, when she was six months pregnant with her sixth child, Larry came home to find a hole in the living room ceiling. Ann had decided to renovate the attic and create a few more bedrooms. She built a staircase that is still not squeaking after 30 years, which she designed and fabricated herself. Her children sometimes wore clothing that looked store bought with its quality and are family heirlooms today. She had mixed results with her cooking. She made the most wonderful fresh bread that her kids would gobble up after school. On the other hand, her oatmeal cookies were also known as dog biscuits, but were her husband’s favorite. She sent him off to work every day with frozen ones which he enjoyed immensely. She was often making things in her kitchen and she was very proud of the countertop that she resurfaced and rewired. These same talents has been passed to some of her children. Ann had many other talents and passions. One of her greatest passions were family history. She was very organized with family records and stories. She had a near photographic memory and could recite any story or any date about any of her relatives along with their history. She talked about it in a way like she had personally grown up with someone from 127 years ago. She had the gift of gab by talking and making you smile for 20 more minutes later than you every intended to spend. She had a passion for attending the temple. Later in life she crocheted everything from blankets and double-stitch elf hats to Doctor Who TARDISes and VW Bugs. She is survived by her husband, Larry Ben Hull, her siblings, John, Keith (Helen), Lance (Kris), and Glenda (Ian) White; and her children Jenny (Matt) Speth; Nate (Annie) Hull; Kristina (Pedro) Rincon; Benjamin Hull; Janna (Jedediah) Lieber; Laura (Alex) Stoddard; Daniel Hull; Sallie Hull; and her 13 grandchildren, precisely as Mum used to say. Funeral services will be held Saturday, May 12, 2018 at 11:00 a.m. in the Hyde Park 9th Ward Chapel, 65 East Center St. Friends may call on Saturday at the Church from 9:00 to 10:30 a.m. Interment will be in the Hyde Park Cemetery. Condolences may be sent to the family online at www.nelsonfuneralhome.com.

Joy Ann Holman Hull, June 1, 1955, passed away in Hyde Park, UT on May 6, 2018. Our loving wife, mum, grandmother, and sister, returned to Heavenly Father on Sunday. Awaiting her is her mother, father, and younger brother Jimmy. Ann was born... View Obituary & Service Information

The family of Joy Ann Holman Hull created this Life Tributes page to make it easy to share your memories.

Send flowers to the Hull family.