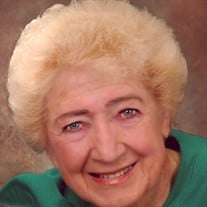 June Murray Hill Bowen On Saturday, February 14, 2015, a strong, dark, and handsome Marine came by and once again swept his girl off to the Valentine Dance. A perfect day to a storybook ending couldn&#8217;t have been better penned for two sweethearts... View Obituary & Service Information

The family of June Murray Hill Bowen created this Life Tributes page to make it easy to share your memories.

Send flowers to the Bowen family.