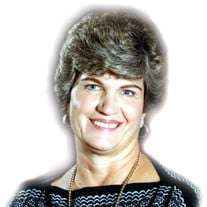 Karma Ann Schoonover, 77 years old, returned home to her Heavenly Father on December 22, surrounded by her family after many years of struggling with health problems. She was born in Lehi, Utah to Ralph and Lillian Hoggard. She was raised in American Fork Utah, and graduated from American Fork High School. She met the love of her life, Eldon Jay Schoonover in the late summer of 1957. They were married August 22, 1958 in American Fork. They were later sealed in the Salt Lake City Temple on November 10, 1964. They have celebrated more than 59 happy years of marriage. Her husband thought she was the most beautiful person in the world and will miss her terribly. They have five children, Dennis (Lisa) Schoonover of Lehi, Wendy (Kevin) Kelley of Green River, WY, Suzanne (Roger) Merrill of Lehi, Steven (Sandy) Schoonover of Lehi, and Vicki (Jason) Godfrey of Nibley. They have fourteen grandchildren and twelve great-grandchildren. She dedicated her life to raising her family and worked for the sheriff of Cache County as a secretary. She faithfully served in numerous callings in the church including serving as a missionary for the LDS church to Nauvoo during the reconstruction of the temple, which was a major highlight in her life. After retirement, she and her husband traveled south in the winter and went camping during the summer. She spent her retirement surrounded by her children and grandchildren whom she spoiled. She is preceded in death by her parents and sister Shirley, and is survived by her brother Ernest Hoggard of American Fork, Utah. The mortuary services are under the direction of Nelson Funeral Home. There will be a viewing held at the funeral home, located at 162 E 400 N, Logan, UT 84321, on Thursday, December 28 from 6:00-8:00 pm. The viewing and funeral services will be held Friday, December 29 at the Lundstrom Park 1st Ward Chapel at 1260 North 1600 East Logan, Utah 84341. The Viewing will be from 9:30-10:30, with funeral services following at 11:00. Following the services, the internment will be held at the Logan City Cemetery. A special thanks to Legacy House and Intermountain Hospice for their special care. Condolences may be sent to the family online at www.nelsonfuneralhome.com.

Karma Ann Schoonover, 77 years old, returned home to her Heavenly Father on December 22, surrounded by her family after many years of struggling with health problems. She was born in Lehi, Utah to Ralph and Lillian Hoggard. She was raised in... View Obituary & Service Information

The family of Karma Ann Schoonover created this Life Tributes page to make it easy to share your memories.

Send flowers to the Schoonover family.