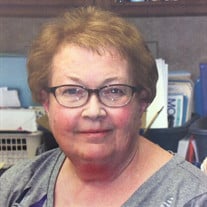 Kathryn Belle Keller Stevens, 72, died peacefully at her home in North Logan, Utah early Sunday, November 6, 2016. Her husband, Lyman, who had been lovingly attending to her care, was faithfully by her side. Since 2012, she had battled lung... View Obituary & Service Information

The family of Kathryn Belle Keller Stevens created this Life Tributes page to make it easy to share your memories.

Send flowers to the Stevens family.