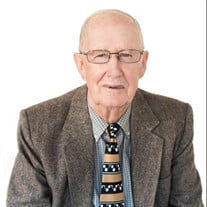 Kendall C. Corbridge, our sweet, kind Husband, Father and Grandpa, 86 of Smithfield, passed away peacefully surrounded by his loving family, Saturday, September 4, 2021 in Logan. Kendall was born October 4, 1934 in Franklin, Idaho to Douglas and Virginia Corbridge. His siblings are; Peggy (Blair, deceased) Greaves, Preston; Pam (deceased) (Bob) Zumbrunnen, Bountiful; Kay Bell (Dana), Ohio, and Cindy (Shane) Keller, Preston. After graduating from Preston High he joined the Army. Upon his return he married the love of his life, Maxine Olney of Smithfield, in 1955. He then decided to further his schooling and attended Barber School in Salt Lake City. Kendall and Maxine raised four children: Keven (Tracey, deceased) Corbridge, Douglas (Dorothy) Corbridge, Terri (Odell) Speth, and Cathy (Mark) Campbell. They are blessed with eleven grandchildren and 25 great-grandchildren. Kendall’s family moved to Cache Valley in 1962 and he became “Casey the Barber” in Smithfield. This is where he cultivated friendships and treated his guests to a tootsie roll for 55 years. Even after Kendall tried to retire, he had many friends convince him to keep cutting their hair. Nobody could do it quite as well as “Casey” could. Kendall and Maxine have been married for a blissful 66 years and have lived a real life love story. They have been each other's best friend and enjoyed going on trips, camping, playing cards, dancing and spending time with their friends. It was common for Kendall to sneak a kiss from Maxine whenever he could. Their love story will continue to be an example to their family through the centuries. Kendall was a dedicated husband, father, grandpa and friend. He treasured the time he spent with those around him and never took those moments for granted. He was a loving father that led his family by example and cherished each moment. His greatest joy was spending time with his children, grandchildren and great-grandchildren. He was a welcome site at soccer games, dance recitals, school plays and many other activities his grandchildren and great grandchildren were involved in. He tagged along happily wherever his family asked him to go. Kendall was an avid golfer that enjoyed many hours golfing with his buddies. He was especially proud of the hole in one he got on the Birch Creek Golf Course. He enjoyed spending the fall, hunting with the boys, and the spring and summer, growing his garden for all to enjoy. Kendall has been a lifelong member of The Church of Jesus Christ of Latter Day Saints. He has held many callings and very close to his heart was his service as Bishop of the 1st and 2nd Ward in Smithfield. He always was the perfect example of Christlike love and always taught through example. He had a knack for making people feel special. His ward members appreciated his calm demeanor and have referred to him as the calm amongst their storms. Kendall is loved by all and will be missed by many. Although his time on earth is done, he lived a life to be proud of. Funeral Services will be held Friday, September 10, 2021 at 12:00 p.m. in the Smithfield South Stake Center, 451 S. 250 E. There will be a viewing beforehand from 10:30-11:30 a.m. There will be a viewing Thursday evening from 6:00-8:00 p.m. at Nelson Funeral Home, 85 South Main, Smithfield. Friends may call Thursday evening and Friday during the viewing. Interment will follow at the Smithfield City Cemetery.

The family of Kendall C Corbridge created this Life Tributes page to make it easy to share your memories.

Send flowers to the Corbridge family.