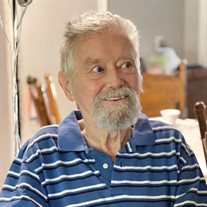 LaFarr Stuart passed away peacefully with family by his side on July 26, 2021. LaFarr was born July 6, 1934 to LaVick and Sara Durrant Stuart in Clarkston Utah. He attended North Cache High School Graduating in 1952. One of his most prized memories from High School was taking all the yearbook photos. He had a good eye for taking a great photo. After high School LaFarr started college at Utah State University. Where he joined the ROTC. He received 3 bachelors degrees. One in Mathematics, Chemistry, and Physics. The Air Force sent LaFarr to The University of Utah to earn his degree in meteorology. After being discharged from the Air Force in 1959 LaFarr attended college at Iowa State University to finish his degree in Meteorology. It was there that LaFarr found his love for computer programming. LaFarr programmed the University’s Cyclone Computer to play music through an amplified speaker. A recording of an interview with LaFarr and his computer music was broadcast nationally on NBC Radio. Something he was quite proud of. LaFarr worked for Control Data Corporation. The company that designed the first commercial super computer. He also worked for RCA and Zytrex. He invented and patented the digital computer clock. LaFarr always joked that he was partially responsible for the Y2K fiasco. Since it was his computer clock everyone was worried would crash everything. He would say “it’s going to be fine.” He lived in many different places, but his favorites were San Jose, California, Clarkston, Utah, and Quartzsite, Arizona. Every year he just went where it was warm. LaFarr had a zest for life like no one else around. He backpacked the Sierra Nevada’s regularly, because it was his favorite place to be. Became a pilot so he could fly his own planes, but not the same planes he would jump out of to feel the rush of free falling before deploying his parachute. Scuba Dived in Mexico, where it was the most beautiful place he had ever seen. He talked to every one he came into contact with, and usually left with a new friend. LaFarr was daring, kind, witty, and very sharp. He lived life on his own terms and found it to be a great adventure...an adventure LaFarr lived to the fullest. There will a celebration of life for LaFarr at the Clarkston City Cemetery on Thursday July 29, 2021. A viewing will be held at the cemetery from 9:30 to 10. Followed by a graveside funeral. LaFarr would say clothing is optional...we just ask that you dress casual. Nelson Funeral Home is inviting you to a scheduled Zoom meeting via the following link. https://us02web.zoom.us/j/86773092921?pwd=dFpBL2VJb0NhOHQ4bExUdTc1bDJxZz09 Meeting ID: 867 7309 2921 Passcode: Stuart

LaFarr Stuart passed away peacefully with family by his side on July 26, 2021. LaFarr was born July 6, 1934 to LaVick and Sara Durrant Stuart in Clarkston Utah. He attended North Cache High School Graduating in 1952. One of his most prized... View Obituary & Service Information

The family of LaFarr Stuart created this Life Tributes page to make it easy to share your memories.

LaFarr Stuart passed away peacefully with family by his side...

Send flowers to the Stuart family.