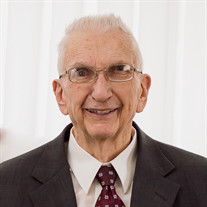 LaMar George Nelson, 89, finished his mortal journey on October 11, 2015. He was born in Smithfield on July 31,1926 to George and Veda Nelson and lived there his entire life. He graduated from North Cache High School in 1944 and then served in the Army Air Corp during the end of World War II. Upon returning home he served an LDS mission to the North West States LDS Mission from October 1946 -1948. His sweetheart and wife of 66 years, Thais Nielson Nelson, had become part of his life at an early age as they grew up a few blocks from each other. They dated while going to school and she waited for LaMar to return from his LDS mission and military service. They were married March 25, 1949 in the Logan LDS Temple. LaMar attended Utah State University and worked in the insurance business for many years with Prudential, Hatch Insurance Agency, and then formed his own insurance agency. LaMar and Thais enjoyed the many friendships and opportunities for travel that came with his years of employment. They also owned a car wash and storage units in Smithfield that provided work opportunities for kids and grandkids in addition to the income. He was a faithful, long-time member of the Logan Kiwanis Club during his working years and enjoyed the friendships and service opportunities that came with it. The church and faith were always important to LaMar. He served faithfully in many church callings besides his full-time mission. He particularly loved the time he spent serving in a young single adult ward bishopric at Utah State. He also served as a full-time missionary with his wife to the Ohio Cleveland LDS Mission from 1993-1994 and upon their return served as officiators in the Logan Temple for nearly 18 years. LaMar has always loved animals and raised a variety of birds and animals over the years. He enjoyed sharing this hobby with kids and grandkids and teaching them how to feed and care for them. Family and the outdoors were always an important part of his life and many fond memories were created while hunting, fishing, snowmobiling, riding ATVs and horses, camping, or just family outings in the beautiful outdoors. LaMar is survived by a sister, Ruth Nielson and his children: Valerie Bosworth of Logan; Roger (Jean) of Trenton; Sharla (Jim) Vanderbeek of Hyrum; Lorraine Nelson of Chubbuck, Idaho; and Gordon (Jami) of Smithfield. He has 25 grandchildren and 34 great-grandchildren. He was preceded in death by his parents, his wife (by only 17 days), two brothers, a sister, and a grandson. Funeral services will be held at 11:00 a.m. on Saturday, October 17th, 2015 in the Smithfield 25th Ward Chapel, 660 West 200 North, Smithfield, Utah. A viewing for family and friends will be held beforehand at the church from 9:30-10:30 a.m. Interment will be in the Smithfield City Cemetery. Condolences may be sent to the family online at www.nelsonfuneralhome.com.

LaMar George Nelson, 89, finished his mortal journey on October 11, 2015. He was born in Smithfield on July 31,1926 to George and Veda Nelson and lived there his entire life. He graduated from North Cache High School in 1944 and then served... View Obituary & Service Information

The family of LaMar George Nelson created this Life Tributes page to make it easy to share your memories.

Send flowers to the Nelson family.