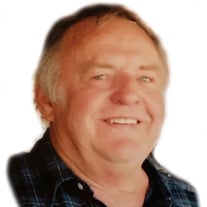 Laren Harvey Allred passed away on October 22, 2015 peacefully in his home. Laren was born July 24, 1940 in Afton, Wyoming to Harvey Rich Allred and Margaret Barrus Allred. He grew up in beautiful Star Valley, Wyoming while learning how to tinker with things at a young age. Laren had the pleasure of having six older sisters who enjoyed dressing him up as a girl and pushing him around in a stroller. It was these type of events that inspired him to devote a significant portion of his childhood playing brilliantly conceived pranks on his sisters, cousins, neighbors, and pretty much anyone who was unfortunate enough to cross paths with him. The Allred family relocated to Cache Valley where Laren lived the rest of his life. Laren served in the armed forces during the time of the Cuban missile crisis and he also served briefly on the Logan City Police force. Although he enjoyed the police force, his heart was really into learning how things worked. Laren became a gifted auto mechanic, aircraft mechanic, and entrepreneur. He started his own auto mechanic business, Import Auto, founded in 1972, which remains a successful business to this day. His love for aviation mechanics inspired him to obtain an Airframe Inspector Certificate, at which time he also started a second business, Air Service West, an aircraft salvage company. He rebuilt a Pitts Special Biplane which flew successfully, entertaining crowds of people at the Logan Airport. Laren met his wife LuDean, a waitress at his favorite Logan drive-in, and they were married in 1962. They raised four children in Smithfield and spent many years together enjoying the outdoors and their cabin in Wyoming. Laren was preceded in death by his parents, Harvey and Margaret, and his sisters Nadine Laird, Carma Jenkins, and Shirley Nelson. He is survived by his wife LuDean Allred, his children Greg Allred, Gary Allred, JoAnn Tolman and Brad Allred. He is also survived by twelve grandchildren, two great grandchildren, and by three sisters Lynette Staples, Joyce Jenkins, and Deanne Humphreys. Funeral services will be held at 1:00 pm on October 26, 2015 at the Smithfield 7th Ward Meetinghouse located at 79 East 200 South in Smithfield, Utah. A viewing will be held prior to the service from 11:30 to 12:30. Burial will be at the Logan Cemetery. Memories and condolences may be expressed to the family online at www.nelsonfuneralhome.com

Laren Harvey Allred passed away on October 22, 2015 peacefully in his home. Laren was born July 24, 1940 in Afton, Wyoming to Harvey Rich Allred and Margaret Barrus Allred. He grew up in beautiful Star Valley, Wyoming while learning how to... View Obituary & Service Information

The family of Laren Harvey Allred created this Life Tributes page to make it easy to share your memories.

Send flowers to the Allred family.