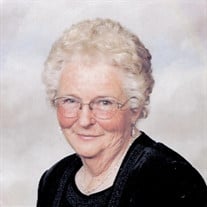 LaRue Cronquist, 92, of North Logan, Utah, passed away peacefully, surrounded by loved one son April 25, 2019. She fought an extremely valiant battle against Alzheimer’s Disease the last four years of her life. In spite of this, she always maintained her pleasant, positive spirit. She always lit up the room with her warm eyes and bright smile. She loved all that she knew, and she was loved by all who knew her. She was kind to everyone and loved unconditionally. She left her earthly existence just as she lived her life, with gentle strength, grace, and dignity; leaving all who shared that experience with her in awe of her graceful endurance. LaRue was born and raised in Laketown, Utah. She shared fond memories of her childhood, and growing up through the depression. Despite having very little and living with government issued ration cards, she never felt as if they were poor. She joyfully told stories of the excitement of Christmas, when they were thrilled with their Christmas orange. She was an eternal optimist, helping others learn to see the best in life’s challenges. At a very young age one of her chores was to herd the cows to Bear Lake to water. Upon watering, she would then drive them back to the pasture. Her dad referred to her as his girl Friday, as she always prefered to help him with the outside chores, rather than working inside. She attended Fielding High School until her senior year, at which time she moved to Ogden, Utah, where she graduated from Ogden High School. She met her future husband, Scott Eugene Cronquist, before he joined the United States Army during World War II. She lived through challenging times where she developed her life long skill of hard work and carefully managing her resources. She and Scott exchanged letters throughout his service. After he returned from the war, they were married on September 16, 1946. LaRue was an outstanding cook. She loved preparing meals for her family. She kept a garden and preserved all kinds of fruits and vegetables. She was an expert bread maker, and her dill pickles, pickled beets, raisin filled cookies, custards, bottled raspberries, along with many other culinary delights, were unsurpassed. She also worked for several years as a lunch lady for the Cache County School District. This was a happy time for her as she worked side by side with many of her dearest friends. LaRue worked alongside her husband for most of their marriage on the family cattle ranch. It has always been referred to as the meadow. She has spent countless hours working in all capacities with the cattle and land. Her ability to work long hard hours was incredible. After her husband passed away, she continued to work in the meadow up until her mid eighties. She was a member of the Church of Jesus Christ of Latter-day Saints. She served as a visiting teacher for many many years. She also served as a primary teacher and primary pianist. She served quietly. She never sought limelight or recognition, but always just went about the business of doing good. LaRue is survived by her children, Kelly Scott Cronquist, Launa Murdoch (Reece), and Jed Cronquist (Cindy). She has 16 grandchildren, 37 great-grandchildren, and 3 great-great grandchildren. She was preceded in death by her husband, Scott Cronquist, a son, Kirk Irwin Cronquist, a daughter in law, Sheryl Orr Cronquist, a granddaughter, Tonya NaCole Poppleton, her parents, Brig Irwin and Joyce Shelton, and all of her sisters, Maxine Boitano, Rosella Parsons, Virginia Jackson, and Beatrice Arnell. The family would like to thank the staff of Autumn Care in Hyde Park for the very personalized loving care that was rendered to our sweet mom. We are so appreciative of those who have expressed their love for her, and how much they loved her smile, knowing that there was so much more to her than could be seen as she was trapped inside a body that was suffering from effects of Alzheimer’s. We would also like to thank Intermountain Homecare and Hospice. We would like to particularly recognize Hospice nurse, Gaby Carter, who not only held our mom’s hand and heart through her passing, but ours as well. Thank you! A viewing will be held on Monday, April 29, at Nelson Funeral Home, located at 162 East 400 North, Logan, Utah 84321. There will also be a viewing held on Tuesday, April 30, at that same location, one hour prior to the funeral which will begin at 11:00am. Burial will take place at the Logan City Cemetery. Condolences and memories may be shared with the family at www.nelsonfuneralhome.com

LaRue Cronquist, 92, of North Logan, Utah, passed away peacefully, surrounded by loved one son April 25, 2019. She fought an extremely valiant battle against Alzheimer&#8217;s Disease the last four years of her life. In spite of this, she always... View Obituary & Service Information

The family of LaRue Cronquist created this Life Tributes page to make it easy to share your memories.

Send flowers to the Cronquist family.