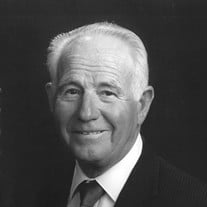 LaVon Grant Hansen, August 8, 1918 – May 11, 2019. Lavon Hansen passed away at Legacy House, Saturday, May 11, 2019, at the age of 100. He was born in Logan, to Moroni and Nora May Lowe Hansen, the sixth of seven children. He was always a hard worker and seemed to have endless energy. In his early years he worked in a produce stand and operated two roller skating rinks. He graduated from Logan High School and attended a year of college followed by an LDS mission to the Northwest States. After returning, he joined the Air Force and served during WWII. He received an honorable discharge and returned to Logan where he met Evelyn B. Hansen. They were married on July 29, 1946 in the Logan Temple and had five children, Kendell (deceased) (Catherine), LynnAnne, RonaLee (Steve) Hymas, Terry, and Jolene Diaz. He worked shortly for SE Needham Jewelers and then for Thomson Electric. He began his own electrical business which he successfully ran for 42 years. LaVon was active in the LDS Church and held many positions. He and Evelyn served an LDS mission to the Arizona Temple Visitors Center. He worked as an officiator in the Logan Temple and was also a member of the Bishopric. LaVon was a very healthy 100 and kept busy almost to the end. He attended two sessions at the temple four days a week until a few months before his death. He was constantly making goodies for friends and family. He was well known for his corn pops, raisin cookies, and caramels. No one could come to his home without being offered goodies or root beer milk. Even so, he longed to be released from this life and often spoke of reuniting with Evelyn who passed away four years prior. He was preceded in death by his wife, Evelyn, his parents, a son, Kendell, and his siblings Luzon, Merlend, Gerald, Reta Raymond, and Venice Smith. His only surviving brother, Glen (Martha) Hansen was a great support, especially in his last months at Legacy House. He is also survived by Kendell’s wife Catherine, LynnAnne, RonaLee (Steve) Hymas, Terry, Jolene Diaz, 13 grandchildren, and 14 great grandchildren. The family would like to express their sincere thanks to the staff of Legacy House and IHC Home and Hospice for their compassionate care. We would like to offer a special thank you to all the friends who spent time with Dad and helped him in his twilight years. A viewing will take place Sunday evening May 19 at Nelson Funeral Home, 162 East 400 North, from 6:00 to 8:00 and again Monday prior to Funeral services from 9:00 to 10:30. Services will take place Monday morning, May 20 at Nelson Funeral Home at 11:00 with interment to follow at Logan Cemetery. Condolences may be sent to the family online at www.nelsonfuneralhome.com.

The family of LaVon Grant Hansen created this Life Tributes page to make it easy to share your memories.