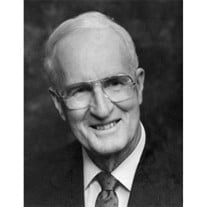 Lawrence Keith Gates, Sr., 88, died on July 29, 2009, in Salem, Oregon. He was born in Richfield, Utah on November 14, 1920 to Lawrence and Myrl Warner Gates. He grew up in Antimony, Utah where he enjoyed the benefits of strong relationships with his extended family. After graduation from Piute High School, he attended the Branch Agricultural College now Southern Utah University in Cedar City, then transferred to Utah State where he completed a BS in Zoology. He subsequently attended medical school at University of Utah and completed an internship at Rhode Island Hospital in Providence. After a stint in the US Army Air Corps, he went into general practice in Logan, Utah. Six years later, his interest in ophthalmology took him and his family to Ann Arbor, Michigan, where he completed a three year residency at University of Michigan. The family then returned to Logan where Keith practiced ophthalmology until his retirement. After retirement Keith and Ora spent much of the year in St. George where they had a home and enjoyed the sunshine of Utah's Dixie. In 1942 he married his college sweetheart, Ora Bills, in the Logan LDS Temple. They were married just short of 60 years when Ora died in March, 2002. Their marriage was blessed with three children, Sheila Lynn, Allison Ann and Lawrence Keith, Jr. Larry. In his student years, Keith was an exceptional student and talented athlete. He participated in tennis, swimming, boxing, basketball and football, while remaining ever mindful of his professional goals and family obligations. During his successful medical career, Keith was also an accomplished golfer, fly fisherman, hunter and skier. He also had a life long interest in and zeal for the study of history and politics. He was a devoted member of the LDS Church, serving in many callings, including Branch President and bishop's counselor. For most of his adult life he was a dedicated member of Lions Clubs International and served for three years as an International Director, a position which took Keith and Ora all over the world to meetings and speaking engagements. A lifelong Republican, he served for many years as the Chairman of the Cache County Republican Party and also served a term in the Utah State House of Representatives. He is survived by his daughter Sheila Miller of North Logan, son Lawrence K. Gates, Jr. and his wife Jennifer of Salem , Oregon , seven grandchildren, two great-grandsons, his brother HH "Jim" Gates and sister Carole Sorensen, many dearly loved in-laws, nieces and nephews. He was preceded in death by his parents, wife Ora, brother Robert, daughter Allison, son-in-law Joe Miller and Allison's son Jonathan. Funeral services will be held on Thursday, August 6th at 11 a.m. at the Logan 9th Ward Chapel at 125 East 500 North in Logan. Friends may call at Nelson Funeral Home on Wednesday evening from 6 until 8 p.m. or at the 9th Ward Chapel on Thursday morning from 9:30 until 10:30 a.m. Burial will be in the Logan City Cemetery immediately following the funeral services. Condolences may be extended to the family at www.nelsonfuneralhome.com In lieu of flowers, the family encourages friends to make contributions in Keith's memory to either the Western Folklife Center, 501 Railroad Street, Elko, NV 89801, please note on the check that the donation is in memory of L. Keith Gates, or, to the Dr. Lawrence Keith and Ora Bills Gates Memorial Scholarship Fund at Southern Utah University. Please send these gifts to the Office of Institutional Advancement, 351 West University, Cedar City, UT 84720.

Lawrence Keith Gates, Sr., 88, died on July 29, 2009, in Salem, Oregon. He was born in Richfield, Utah on November 14, 1920 to Lawrence and Myrl Warner Gates. He grew up in Antimony, Utah where he enjoyed the benefits of strong relationships... View Obituary & Service Information

The family of Lawrence Keith Gates created this Life Tributes page to make it easy to share your memories.

Send flowers to the Gates family.