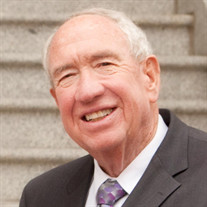 Leland Frank Turner, 75, passed away early Sunday morning, October 23rd, at the Medical Center in Murray, Utah from complications due to Marfan syndrome. He was born to Frank and Beth Turner on July 25th, 1941 in Lynwood California. He was raised in Morgan Utah and worked on the family farm where early experiences set the framework for his entire life. Leland’s life was marked by service. He worked for the US Army Corps of Engineers in Walla Walla Washington as a landscape architect for many years, then later as the executive assistant to the Colonel where he had the opportunity to meet with many people, from contractors to congressmen to Native American tribal leaders, each of which he treated with respect. It was said by those acquaintances that Lee brought a calming spirit to potentially difficult circumstances. His cheerful and uplifting demeanor was a light to those he served with professionally. As much as his profession meant to him, his family and his relationship with God were far more important. He served an LDS mission to Canada as a young man, and then served two missions for the church with his wife Ileen, going to Leeds, England and Auckland, New Zealand. Leland served in many callings within the LDS church. As a bishop he had the opportunity to influence countless lives for good. Even to this day, many dear friends from Walla Walla still call him bishop. Leland was a fiercely devoted husband and father. Ileen and his two boys knew they always came first. This was shown by endless camping trips in the summer, wood trips in the fall and skiing trips in the winter. In the final moments of Leland’s earthly life, Ileen’s testimony to his doctor was this, “He is a good man. He has accomplished everything in his life that he wanted. There is nothing left for him to do. He can go home to Heaven in peace.” More true words have never been spoken. Although we mourn the loss here on Earth of an amazing husband, dad, grandfather and brother, we find solace in knowing that Heaven has brought home one of its choicest spirits. Leland is preceded in death by his mother and father. He is survived by his sweet wife of 51 years, Ileen, their boys Grey (Lisa) Turner and Dan (Jayna) Turner and six wonderful grandchildren; Drake, Lexi, Emilee, Elise, Tyler and Will; his brother, Terry (Myra) Turner, and his three sisters Colleen (Julian) Anderson, Tamara (Steve) Morgan and Vicky (Richard) Carter. Funeral services will be held on Friday, October 28th at the LDS chapel in Logan located at 825 North 200 West. A viewing will be held at 10:00 a.m. and funeral services will begin at 12:00. Interment at the Logan City cemetery will follow the services."In lieu of flowers, the family would appreciate a contribution to the Marfan Foundation for continued research. Contributions can be made at www.marfan.org"

Leland Frank Turner, 75, passed away early Sunday morning, October 23rd, at the Medical Center in Murray, Utah from complications due to Marfan syndrome. He was born to Frank and Beth Turner on July 25th, 1941 in Lynwood California. He was... View Obituary & Service Information

The family of Leland Frank Turner created this Life Tributes page to make it easy to share your memories.