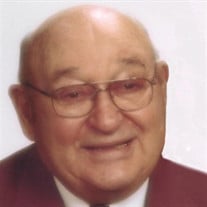 Lew Deland Cook, of Logan, passed away on September 8, 2016. Born in Garden City, Utah on July 24, 1924, he was the son of Joseph Nelson Cook and Julia Alnora Dustin. During his 92 years of life he has witnessed tremendous changes in the world. But he always believed that the things which really matter do not change. Kindness, compassion, forgiveness, good humor, a willingness to serve, love and hard work, these are the things that will change the world. His father was a sheep rancher and one of the first memories Lew had “was tagging my father around the farm, riding behind the saddle with him wherever he went.” By age 3 Lew could ride a horse alone. He had also learned to swim. “We made it a rule each year to go swimming in Bear Lake on the last day of school. Sometimes we had to push the ice away,” he recalled, “But it was always fun.” Those were happy, carefree days spent with 3 older brothers, Vernon, Drew, and Kaa and his sister Loa. But darker times lay just ahead during the Great Depression. The family pulled together in order to make ends meet. Lew, being youngest became his “mother’s errand boy,” doing chores around the farm, while the older boys worked in the fields. Their lives were ‘work, work, work’, from sunup to sundown. “Father was very good to me.” Lew recalled, “When I was about six, I took a fancy to a little orphaned lamb. The day we were moving the sheep to spring pasture it was nowhere to be found. I coaxed my dad to take me with him on the horse to see if we could find it. It was after dark when we got back. I never found my lamb, but I had a good day with my dad.” At age 12 he spent Christmas Eve alone at the ranch tending the sheep in the midst of a blizzard. The next morning he awoke to a white, but very lonely Christmas. But it wasn’t long before he heard sleigh bells tinkling as they hung on bridle of a horse as his father came to find him. It was a Christmas he would always remember. When the older brothers went off to war, Lew was left behind to help his father do the work that once had been shared by four. By 1943 the world seemed brighter. Lew met Mildred Cooper Hoskin in the early spring. They were married later that fall in the Logan LDS Temple. The first year of marriage they spent at the Meadowville ranch. They did everything together and Lew recalled with a smile, “Mildred had never done much cooking, so she experimented with foods and I learned to eat without comment.” A very wise man to be sure. Eventually they made their home in Garden City and together they nurtured and taught three children: Michael, Gary, and Kristy. Lew and ‘Midge’ as he usually called her, both served in many Church callings. They held regular “Family Hours” even before it was an official Church program. And during those years Lew often worked two jobs, farming by day and working construction or other jobs at night. He never seemed to let down or slow up. There were cows to milk and sheep to shear and fields to plow and plant. And looking back one has to wonder: “Where did he get all that energy? And when did he ever sleep? In 1960 they moved to Logan which has been home ever since. Lew had worked in a variety of occupations through the years: from rancher to bus driver and now he took on car sales and eventually homebuilding and real estate. He believed in giving his best effort to whatever he did and worked hard to provide for his family. He was a natural leader but never coerced. He inspired others through example. Following a knee replacement surgery he helped organize and chair the March of Dimes Walkathon in Logan. He also delivered Meals on Wheels for a time. Lew was especially close to his oldest brother Vernon. Several times Vernon had taken him “under his wing.”. And years later when age took its toll on Vernon’s health, Lew, who was not well himself, would go every day to help care for his brother. “That’s what brothers do,” he would say. Lew was always a man of few words. He would say “The wise old owl sat in the oak. The more he heard the less he spoke. The less he spoke the more he heard. Why can’t you be like that wise old bird?” Mildred, who loved to talk, never gave up trying to get Lew to say more. Each year for 50 years, he composed a clever rhyming New Year’s resolution to inspire his family and friends. “Be all you can be in 2003.” “Try to do more in 2004.” And so on. Lew was a faithful member of the LDS Church and served in many positions: Sunday School President, Scoutmaster, several times as a Bishop’s Counselor, and his favorite calling as High Priest Group Leader. He was also a home teacher. Most recently he and Mildred served as ordinance workers in the Logan Temple. They had been married for almost 73 years when Mildred passed away earlier this spring. Lew has been very lonely since but has held firmly to the hope that their separation wouldn’t be long. As a family we wish to thank all who have helped care for our father, especially the management and staff of Access Home Health Care and Legacy House for the kind and loving service they have rendered. A celebration of his life will be held at Nelson Funeral Home, 162 East 400 North, Logan on Saturday, September 17th at 12 noon. A viewing will take place from 10:00 to 11:30am. Interment will be in the Logan City Cemetery.

Lew Deland Cook, of Logan, passed away on September 8, 2016. Born in Garden City, Utah on July 24, 1924, he was the son of Joseph Nelson Cook and Julia Alnora Dustin. During his 92 years of life he has witnessed tremendous changes in the... View Obituary & Service Information

The family of Lew Deland Cook created this Life Tributes page to make it easy to share your memories.

Send flowers to the Cook family.