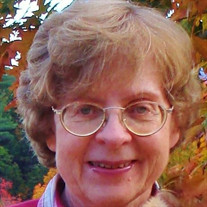 Linda Darley Huppi was born in Logan and grew up in Hyrum, where she attended Lincoln School and South Cache High School. An accomplished pianist, she studied for many years with Irving Wassermann in Logan. She graduated from Utah State University in 1968 and moved to the Boston area shortly after. She married Ronald J. Huppi of Logan in 1973, and they have three sons and one daughter: Jonathan, Benjamin, Jeffrey and Jan Marie (and husband Eric Slaymaker), and three grandchildren: David, James, and Julia, who were the love of her life. She was never happier than when spending time with her family. She also loved taking short drives to enjoy the beauties of nature, whether along the coast of New England or in the mountains and national parks of Utah and Wyoming. Linda was a lifelong member of the Church of Jesus Christ of Latter-day Saints and was a member of the Arlington Ward in Massachusetts. She has been a ward organist, as well as choir accompanist, for over 40 years. In addition she accompanied many soloists and small groups, both at church and other musical events. She also held other positions in her ward, including Primary president, counselor in Relief Society and Young Women, and Ward Music chairperson. She planned and produced a Christmas program for the Relief Society women, as well as a Spring Concert for the community, every year for 30 years. Linda was school accompanist in Winchester, Massachusetts from 1994 to 2015. She loved the association with the children in Winchester, as well as the very talented and wonderful music faculty. She was also a member of the Sounds of Grace Hospice Choir for eight years before her illness forced her to give up doing most of the things she loved. She gave her best effort to everything she did, and always strove for excellence. She cared deeply about taking care of the environment, preserving beautiful places and events, and treating everyone with fairness and respect. She was genuine, peaceful, humble and patient, and was kind to everyone. She was so appreciative of the loving care and support of her family and close friends during her illness. The family wishes to thank Dr. Jose Guerra for his compassionate care during all the years he has taken care of Linda. Appreciation is also extended to the ALS Clinic at Mass. General Hospital, and to the CCALS organization in Falmouth, Mass. Linda was preceded in death by her parents, Valene and Farrell Darley, her sister Ruth Ann, and a special brother-in-law, Ray Huppi. She is survived by a caring and supportive brother, Steve Darley (and wife Peggy Brennan), and her husband, four children, and three grandchildren mentioned previously. The funeral service will be held at the Nelson Funeral Home, 162 E. 400 N. in Logan at 1:00PM, January 28. Friends may visit at the funeral home between 11 AM and 12:30 PM prior to the service. Burial will be in the family plot in Logan cemetery.

Linda Darley Huppi was born in Logan and grew up in Hyrum, where she attended Lincoln School and South Cache High School. An accomplished pianist, she studied for many years with Irving Wassermann in Logan. She graduated from Utah State... View Obituary & Service Information

The family of Linda Darley Huppi created this Life Tributes page to make it easy to share your memories.

Linda Darley Huppi was born in Logan and grew up in Hyrum, where...

Send flowers to the Huppi family.