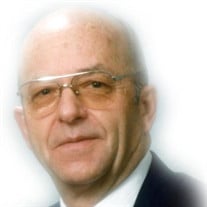 Lloyd Orrie Heaps passed away on Monday, August 20, 2018 in Logan, Utah. Lloyd was born on February 27, 1936 in Smithfield, Utah. He was the 3rd child of Orrie Hargraves and Fern Rogers Norris Heaps. Lloyd's childhood was filled with family and farm work. He spoke often about sitting on his great grandfather's knee when he was only a toddler and the memories he had of his parents and relatives. He also remembered life on the farm and enjoyed telling stories of the dry farm his family worked around Crow Mountain, just north of Smithfield. Lloyd attended the Cache County schools and graduated from North Cache High School in 1954. While in school he played the trumpet, tennis, wrestled and was a tumbler. In 1955 he married his high school sweetheart, Janel Godfrey in the Logan Temple. Lloyd and Janel began their married life in Logan, then moved to Idaho Falls, Boise Idaho, and Grand Forks, North Dakota for a short time. They returned to Smithfield, Utah to settle down and raise their growing family. Lloyd opened a successful drywall company and worked on Cache Valley and western region construction for more than 30 years. Lloyd was a life-long member of the Church of Jesus Christ of Latter-Day Saints and served in many callings from Young Men's Presidency/Advisor, Stake Seventy, High Councilor, Bishopric Counselor and Branch President. His favorite calling was as a Home Teacher, where he ministered to many families and assisted as the Spirit led him. Lloyd and Janel served a mission to Brisbane, Australia from 2002 to 2003. They have been married for 63 years. Lloyd was preceded in death by his father and mother and his sister, DeVonna Heaps Tolman. He is survived by his wife, and his children: Michael Lloyd (Diana) Heaps of Smithfield, Utah; Diane Webb (Wayne) of Nampa, Idaho; Cristie Olsen (Jeff) of Bountiful, Utah; Allan George (Teresa) Heaps of Meridian, Idaho; Jeffrey Paul (Emily) Heaps of Round Rock, Texas; Annette Heaps of Smithfield, Utah; and Joshua Claire (Bethany) Heaps of Belleville, Ontario, Canada. He has 23 grandchildren and 24 great grandchildren. Funeral services will be held Saturday, August 25, 2018 at 12 noon in the Smithfield 24th Ward Chapel, 451 South 250 East, Smithfield. Friends may call at Nelson Funeral Home, 85 South Main, Smithfield on Friday evening from 6 to 8 p.m. and at the church on Saturday from 10:30 to 11:30 a.m. Interment will be in the Smithfield City Cemetery. Condolences may be sent to the family online at www.nelsonfuneralhome.com.

Lloyd Orrie Heaps passed away on Monday, August 20, 2018 in Logan, Utah. Lloyd was born on February 27, 1936 in Smithfield, Utah. He was the 3rd child of Orrie Hargraves and Fern Rogers Norris Heaps. Lloyd's childhood was filled with family... View Obituary & Service Information

The family of Lloyd Orrie Heaps created this Life Tributes page to make it easy to share your memories.

Send flowers to the Heaps family.