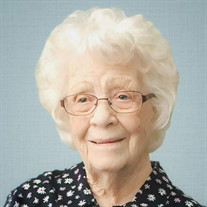 Lois Thornley Harris, 95, passed away peacefully at her son’s home on August 16, 2021 in Meridian, ID. Lois was born on November 11, 1925 in Smithfield, UT. She was the oldest of six daughters born to Echo and Allie Thornley. She grew up working alongside her father and mother on the family farm in Smithfield. At an early age, her father taught her to milk cows, drive tractors, and work the ground to grow potatoes and sugar beets. Lois learned her amazing cooking and seamstress skills from her mother. She also spent a lot of time watching her younger sisters as both of her parents worked. As a teenager, Lois’s family relocated to an area outside of Ucon, ID. She met Harold Clayton at a school event in Idaho and they were married on June 17, 1942 in the Logan, UT Temple. Lois graduated from Ucon HS in 1943 and welcomed a daughter, Patsy, in 1944. While Harold served in WWII, Lois and Patsy moved into her parent’s home and she started a small chicken operation. After the war, the family moved to Montana to continue farming. They soon welcomed two sons to the family, Raymond and Thomas. Promises of higher yielding crops drew them to settle on 80 acres just outside of Toppenish, WA in 1951. They welcomed another son, James. They worked hard to build a custom house and expand their farm. The farm grew to over 1,400 acres and produced sugar beets, corn, wheat, asparagus, and much more. They also established Clayton Grain Company in 1962. Surprisingly, much later they were blessed with one more son, Charles. Lois kept an immaculate house and could be found in the fields, keeping the books, and assisting at the grain company. Harold and Lois divorced in 1982. She went to work at Gavin & Assoc. Law Firm. She raised her youngest son on her own until she married Clarence Harris on July 24, 1987 in the Seattle, WA Temple. They enjoyed 25 happy years together, most of which were spent in Toppenish. They loved serving in the church, helping to care for her mother, and assisting her sons on the farm. Lois was a faithful daughter of God and a member of The Church of Jesus Christ of Latter Day Saints. She taught her children to love and serve God. All her life, Lois served dutifully in her numerous church service opportunities with both children and adults. Lois is preceded in death by her parents Echo and Allie Thornley; husband Clarence Harris; sisters Doraleen Thornley, Margaret Malane Sharf, and Linda Barney; daughter Patsy Layman; grandson Benjamin Clayton; and great grandson Cameron Willett. Lois is survived by four sons Raymond (Jan) Clayton, Thomas (Vondell) Clayton, James (Karen) Clayton, and Charles (Kym) Clayton; son-in-law Roger Layman, sisters Sharon Pearson and ElaDee Alcorn; 32 grandchildren; 55 great grandchildren; and 13 great-great grandchildren. Memorial Service will be held on Thursday, August 26 at 11:00am at The Church of Jesus Christ of Latter Day Saints on 500 Nathaniel Lane in Zillah, WA. Viewing and Funeral will be held on Saturday, August 28 at Nelson Funeral Home on 162 E 400 N in Logan, UT. The Viewing will be from 10:00 - 10:40am and the Funeral Service will start at 11:00am. Gravesite Dedication Service will be held on Saturday, August 28 at the Smithfield Cemetery on 300 E Center St in Smithfield, UT at approximately 12:00pm. Services will be live streamed through zoom: https://us02web.zoom.us/j/88484968714?pwd=bk1WVm42eHVROGdUeVNFQmpWU1NDZz09 Meeting ID: 884 8496 8714 Passcode: Harris

Lois Thornley Harris, 95, passed away peacefully at her son&#8217;s home on August 16, 2021 in Meridian, ID. Lois was born on November 11, 1925 in Smithfield, UT. She was the oldest of six daughters born to Echo and Allie Thornley. She grew... View Obituary & Service Information

The family of Lois Thornley Harris created this Life Tributes page to make it easy to share your memories.

Lois Thornley Harris, 95, passed away peacefully at her son’s...

Send flowers to the Harris family.