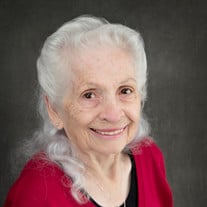 On March 13, 2019, the family of Lois Mignon Waddoups Poulsen lost a beloved mother, grandmother, and great grandmother. She passed away quietly early Wednesday morning surrounded by family. Waiting for her in the heavenly realms were her husband, Larry Neil, her older sister, Zola, and parents, Victor and Thelma, who preceded her in death. A beautiful, dark-eyed, dark-haired baby girl, Mignon was born at St. Anthony hospital in Pocatello, Idaho. Growing up in Lewiston, she loved being with her daddy at his service station. She loved dolls, family, good books, sewing, red licorice and nuts, old movies, baking bread and cookies, painting, and recording her family history in journals and scrapbooks. At the age of eight, Mignon accompanied her parents to Regina, Sask., Canada where they were called to serve a mission for The Church of Jesus Christ of Latter-day Saints. Following graduation from North Cache High School in 1947, Mignon enrolled at USAC (Utah State Agricultural College). After one year she transferred to BYU and graduated in the field of business in 1951. On September 19, 1952 Mignon married Larry Neil Poulsen in the Logan Temple. Larry began his seminary teaching career in Shelley, ID; and together they called various Utah communities home, including North Logan where they spent their retirement years. In 1955 Mignon earned a teaching certificate from USAC, but chose to be a stay-at-home mom. Active in The Church of Jesus Christ, Mignon served ten years in the Young Women program and forty years in the Relief Society, including seven presidencies. Larry and Mignon served a mission in the West Indies and they enjoyed working in the Logan temple. Mignon leaves behind six children, Teri (Stephen) Bunker, Lisa (Blair) Cowley, Victor (Jeri) Poulsen, Mont (Mary-Ellen) Poulsen, Karen (Grael) Barker, and Diane (Jeff) Kanamu, 42 grandchildren, and 56 great grandchildren. Funeral Services will be held Saturday, March 16, 2019 at 1:00 p.m. at The Church of Jesus Christ of Latter-day Saints meetinghouse, located at 625 E. 600 South, Smithfield. A viewing will be held from 11:30 a.m. to 12:30 p.m. Interment will follow at the Smithfield City Cemetery. Condolences may be shared online at www.nelsonfuneralhome.com.

On March 13, 2019, the family of Lois Mignon Waddoups Poulsen lost a beloved mother, grandmother, and great grandmother. She passed away quietly early Wednesday morning surrounded by family. Waiting for her in the heavenly realms were her... View Obituary & Service Information

The family of Lois Mignon Waddoups Poulsen created this Life Tributes page to make it easy to share your memories.

Send flowers to the Poulsen family.