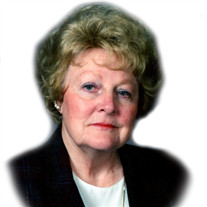 Lois Allsop Petersen passed away in Logan, Utah, at the age of 91. She died peacefully surrounded by her loving family. She will be greatly missed by all those her knew and loved her. Lois started her life on this earth on Groundhog Day, February 2, 1927 in Smithfield Utah. She was born to Bessie Plowman Allsop and Thomas Earl Allsop. She was welcomed into the family by her brothers Dewey & Jack and her sister June. She later was blessed with a baby sister, Jean. She grew up on a farm working with her brothers and sisters, where she learned the value of hard work and responsibility. The motto at their house was “if you want anything done, learn how to do it yourself”. Our mother loved music and started piano lessons when she was eight years old. She excelled and began playing for the Primary when she was twelve. In addition to a life-time of playing for church services, her talent as an accomplished pianist was in high demand, and she would accompany vocalists at various events. Music has always been an important part of her life. She taught hundreds of people how to play the piano and organ and has passed the love of music on to others. Our mother has always had a talent for sewing. She sewed clothes for her three children and herself. When grandchildren came, she sewed blessing dresses for the granddaughters and little suits for the grandsons. She made wedding dresses, formals and most everything her family needed. She was married 58 years to Roger William Petersen, whom she married in the Logan LDS Temple. They spent most of their lives in Benson and later moved to Smithfield. After Roger passed away, she married Calvin Pehrson. They were married eight years before his passing. Cal’s family are wonderful people, and they have blessed the life of our mom. We appreciate the love they have shown to her. She dedicated her life to raising her children, John, Charlot and Thomas. We could have not asked for a better mother who has been such a great example to us. Our mother was an active member of the LDS church and has served faithfully though out her lifetime in various ward and stake callings. Lois is survived by her children, John Petersen, Charlot Archibald (Murray) and Thomas Petersen and by nine grandchildren and six great grandchildren. She was preceded in death by her parents, Bessie and T. Earl Allsop; brothers, Dewey and Jack Allsop; sister, June Curran; and, granddaughters, Kristen and Kami Petersen. A viewing will be held from 6:00 to 8:00 PM on Monday, March 12, 2018 at the Nelson Funeral Home, 162 E 400 N Logan, UT. A funeral service is scheduled for 11:00 AM on Tuesday, March 13, 2018 at the Smithfield 8th Ward Chapel, 155 W 400 N Smithfield, UT. A viewing will also be held from 9:30 to 10:30 AM at the same location prior to the funeral service. Condolences may be sent to the family online at www.nelsonfuneralhome.com.

Lois Allsop Petersen passed away in Logan, Utah, at the age of 91. She died peacefully surrounded by her loving family. She will be greatly missed by all those her knew and loved her. Lois started her life on this earth on Groundhog Day,... View Obituary & Service Information

The family of Lois Allsop Petersen created this Life Tributes page to make it easy to share your memories.

Lois Allsop Petersen passed away in Logan, Utah, at the age of...

Send flowers to the Petersen family.