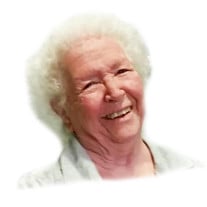 Lola Mae Pierce Spackman, 84, passed away peacefully Sunday, September 11, 2016 at Terrace Grove Assisted Living in Logan, Utah. She was born on March 29, 1932, in Wellington, Utah, the sixth of fifteen children, to Willard Lavor Pierce and Rosie Blackburn. On April 17, 1950, Lola married her eternal boyfriend, Morland Lorenzo Spackman. They were later sealed in the Logan Utah Temple. Morland and Lola raised their family in Trenton, Utah. On their farm, they taught their children and grandchildren how to both work hard and play hard. As an established member of the small community, everyone always enjoyed Lola's company. Even on the worst of days, Lola had the innate ability to change the mood either by cracking a joke, or simply touching your hand with her freshly painted nails and flashing a smile and a wink. She is survived by her four children, Charles (Diane) Spackman, Roger Spackman, Dennis (Karla) Spackman, and Nancy (AJ) Batt; 18 grandchildren, 36 great-grandchildren, and one great-great grandchild; and five brothers. She is preceded in death by her parents, her husband, Morland, nine siblings, and daughter-in-law, Brenda. Funeral services will be held Saturday, September 17, 2016 at 11:00 at the Trenton Ward Chapel, 400 West 1200 North, Trenton, Utah. A viewing will be held from 6:00 to 8:00 p.m. on Friday, September 16, 2016 at the Nelson Funeral Home, 85 South Main, Smithfield, Utah and from 9:30 to 10:30 a.m. on Saturday prior to services at the church. Interment will be in the Trenton Cemetery. Condolences may be sent to the family online at www.nelsonfuneralhome.com.

The family of Lola Mae Spackman created this Life Tributes page to make it easy to share your memories.

Send flowers to the Spackman family.