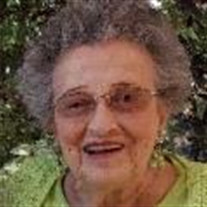 Lorraine Quinn Funke July 28, 1924 - January 15, 2018 Smiling until the end, having given so much and asked for so little, Olive Lorraine Quinn Funke left us on January 15, 2018 at age 93. Lorraine was born in Winnipeg, Manitoba, Canada on July 28, 1924. The youngest of 4 siblings, she was known as Babe and later Aunt Babe to her Quinn family. Lorraine was always proud of her Canadian heritage and often sported a maple leaf pin. At only 23 years old, after both parents had died, Lorraine moved herself to California and found work with Arabian American Oil Co. A few years later, the company transferred her to New York City, where she commuted daily on the Manhattan subway in her stiletto high heels, lovely business suits and hat. In New York, she met Walter Hawley Funke through mutual friends and after 4 years of courtship they were married. When a baby girl was born in 1954, Lorraine took on her lifetime career as mother to Sherry. Although they had just built a new home in Port Chester, NY, work transferred the family to North Carolina in 1958 and there Lorraine and Hawley spent almost 50 years. Since Hawley had graduated from UNC Chapel Hill, Lorraine became a huge Tarheel fan and they attended countless football and basketball games over the years. She would be a sports fan her whole life, checking the scores and keeping up with players on both college and pro teams. Always energetic and outgoing, Lorraine loved to entertain, socialize and go out. Sherry grew up helping serve the many guests in the living room as they danced the cha-cha or the waltz to LPs on the stereo. Lorraine served as a Girl Scout leader, room mother and on the PTA for years. She became a Welcome Wagon hostess, a job she especially loved, greeting new neighbors to the community and making them feel comfortable. She would often bring some of the many tulips and flowers she grew in the yard. Lorraine loved to write letters and cards to her family and friends. At university, Sherry received correspondence often 2 times a week, hand written on various pieces of beautiful stationery! Every December, Lorraine would set up a separate card table in her bedroom to address and write a personal Christmas note to her family and friends. She taught her daughter the importance of staying in touch with loved ones, and always writing a thank you note to acknowledge a gift! In 1978, Lorraine and Hawley moved an hour north of Charlotte and built their dream home on beautiful Lake Norman, where they lived for another 25 years. Right on the water, they enjoyed sailing, motor boating and working in the yard, as well as watching gorgeous sunsets from their porch. They even weathered 1989 Hurricane Hugo together in the lower level. When Hawley retired, they added to their already extensive travels, visiting Russia, Turkey, Norway, Australia, Greece, Central America, and Portugal, taking numerous cruises to Alaska, the Caribbean and the Mediterranean and laying on more beaches around the world than anyone could keep track of! Despite never learning to swim, Lorraine loved being near the water and walking on the beach with her love, "Walter". She loved to talk about her travels. In 2004, they reluctantly sold their N.C. home and moved to an independent living facility in Sun City Center, FL, where they made a whole new group of friends. But 6 years later, they decided to move again, to Logan, Utah to be closer to Sherry and her family. Hawley's health declined and he passed in 2013, after almost 60 years of marriage. Lorraine had moved into her own apartment in the home of Sherry and her husband Jim Dorward, where she happily stayed for over 6 years. During this time, she loved to read and thanks to Lois at the Logan Library, she received a steady stream of books. Lorraine has had various health challenges in the last 7 years, but her family called her the Energizer Bunny for the way she would snap back and keep going with a smile. Her caregivers would often comment on her spunkiness and positive attitude, despite surgeries and falls. Lorraine made her final move to Maple Springs Assisted Living in 2017, but she continued to insist on her independence and ability to care for herself. The staff at Maple Springs provided a wonderfully supportive and caring experience. Lorraine is survived by daughter Sherry (Jim Dorward), grandchildren Benjamin and Heidi Dorward, and one great-grandchild Melanie. She was preceded in death by her 3 older siblings but she has numerous nieces and nephews on the Quinn and Funke side, whom she loved dearly. When a family member survived a cancer diagnosis, Lorraine and Hawley became ardent supporters of Memorial Sloan Kettering Cancer Center. In lieu of flowers, please send contributions to them in her name. Lorraine will be cremated and join her husband in Arlington National Cemetery in Washington, DC. Condolences and memories can be emailed to the family at [email protected] or www.nelsonfuneralhome.com.

The family of Lorraine Quinn Funke created this Life Tributes page to make it easy to share your memories.

Send flowers to the Funke family.