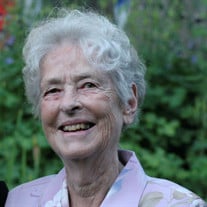 Our beloved mother, Louise Hulda Jones Simmons crossed through the veil of death at her home in Willard, Utah on November 16, 2020 due to complications of old age; she was 89. Born on October 8, 1931 in Los Angeles, California she was the daughter... View Obituary & Service Information

The family of Louise Hulda Jones Simmons created this Life Tributes page to make it easy to share your memories.

Send flowers to the Simmons family.