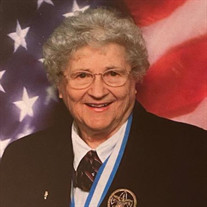 Lucile Floyd (Craft) Hampton Our dear mother, grandmother, and great grandmother, 97, passed away on November 30th, 2021 at Maple Springs in North Logan, Utah. Lucile was born February 6, 1924 in Greene County, North Carolina. She was the oldest of four children born to Nannie Esther Tuck and William Herbert Craft. Lucile lived on her parent’s farm until her father died when she was 11 years old. Her and her sister and brother were placed in a Methodist orphanage in Raleigh, North Carolina where she lived until she was twenty years old. She attended two years of college at High Point College in High Point, North Carolina after which she moved to Chicago where she worked as a secretary and receptionist. She met the love of her life, George Lee Hampton, in Chicago. They were married November 24, 1951 in the Methodist church in downtown Chicago. Their marriage was later solemnized in the Salt Lake Temple on August 17, 1966. Together they raised their three children, George Lee, Cynthia Ann, and Diane Lynn. While raising their children in Chicago, they were introduced to the Church of Jesus Christ of Latter-Day Saints and were baptized in 1963. In 1967 they moved to Springville, Utah where her husband, George, managed the photo studio at Brigham Young University for many years. Lucile enjoyed being a “stay at home” mom except for working for the school lunch for several years. Lucile held many callings in the Church of Jesus Christ of Latter-Day Saints but by far her favorite were her Scout callings. She was active in Scouting for the Springville 5th ward and stake, the Hobble Creek District, and the Utah National Parks Council for many years. After moving to Smithfield, Utah she became active in serving in the Trapper Trails Council. Among her many Scouting awards, she earned the District Award of Merit and the Silver Beaver award and earned her Wood Badge beads. On her 95th birthday she received her 55-year service pin and was awarded the James E. West Fellowship Award from the Boy Scouts of America, Trapper Trails Council. She was a positive influence for hundreds of young men as they achieved their Eagle Scout Award, prepared for missions, and became productive citizens. She was a loving mother, grandmother, and great-grandmother and a loving wife to her husband, George. Her zest for life and her friendly nature will be missed by many. Lucile is survived by her children, George Lee Hampton III, Cynthia Ann Carman and by 15 grandchildren and 26 great grandchildren. Lucile was proceeded in death by her husband, George (2010) a daughter, Diane (2018) and a grandson, Joseph (1982). The family would like to thank the staff at Maple Springs Assisted Living and CNS Hospice for the loving care Lucile received during her last year. Funeral services will be held on December 11th at Nelson Funeral Home in Logan, Utah. A viewing will be held at 12:00 noon, followed by a funeral service at 1:30 p.m. Interment will be at the Smithfield Utah Cemetery directly following the funeral service. Services may be viewed by Zoom at: Password "Hampton" https://us02web.zoom.us/j/81502364390?pwd=TkRPNFpjN08xSkNueUhPZkdKQklBQT09

Send flowers to the Hampton family.