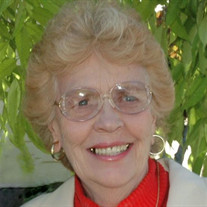 LuDean Clossner Johansen, 82, passed away peacefully on May 9, 2018, after a short illness. She was born on January 24, 1936, in Logan, Utah, the third of four daughters born to Herman and Alice Luella Hansen Clossner. Both of her parents passed away while she was in her teens. She graduated from Logan High School in 1954, then moved to Salt Lake City where she attended the Steven Henager College of Business. After graduation she got a job as the secretary for a real estate office, American Housing, where she was skilled in taking shorthand dictation and typing legal documents. LuDean loved her days as a single working girl in the big city, and often spoke of how she enjoyed this carefree period of her youth. Always very social, she made many friends then and throughout her life who appreciated her warm, outgoing manner and fun sense of humor. Returning to Cache Valley for a visit one weekend when she was 19, she went with her sister Joan to a dance at the Elite Hall in Hyrum. This is where she caught the attention of Larry Johansen, a tall soldier on leave from the army, who asked her to dance and then to drive her home, stopping first for hamburgers at Pete’s Spudnut, a small drive-in in Logan. They became engaged about three years later and were married on October 24, 1958, in the Logan LDS Temple. After they married, LuDean and Larry settled in Hyrum where they raised their three children and have lived ever since. They would have celebrated their 60th wedding anniversary next fall. LuDean worked part time as a party waitress at the Bluebird Café in Logan for a few years after her marriage, then when her youngest child started school began working in the school lunch program, first at South Cache and later at Mountain Crest. She became the first lunch manager at the new Mountain Crest High School in 1983, working hard the summer before the school opened to organize the new kitchen and plan for its successful operation. She was a wonderful cook and put all her effort and creativity into offering truly delicious meals back in the day when hot lunch was prepared largely from scratch each morning. LuDean was a lifelong member of the LDS church and served faithfully in many callings, including president of the Relief Society and Young Women’s as well as in the Primary. Upon her retirement she served for many years as a missionary at the LDS Distribution Center. Her most long-term church assignment was as a visiting teacher, a calling she took very seriously and, to the knowledge of her family, never missed a month during many decades of loving service to her sisters. Compassionate service was truly her hallmark characteristic, as she quietly saw to the needs of others through countless meals and baked goods as well as many other acts of goodness and charity throughout her life. As a beloved mother to her son and two daughters, Mom devoted herself to helping us become “good humans,” ever watchful of our spiritual and moral development. She taught us to be kind to others, to work hard, to take seriously our educations, to keep our commitments, and to rely upon faith and prayer in meeting the challenges of life. Nothing was more important to her than the welfare and happiness of her children, grandchildren, and great-grandchildren; and of course her loving husband, Larry, to whom she was entirely devoted for 59 years of marriage. LuDean is survived by her husband, Larry; children Bart Johansen (Karen), Jan Petersen (John), and Stacey Hogan (Tom). She has twelve grandchildren: Parker (Valeria), Mandilyn, Ryan, Colin, and Garrett Johansen; Jessame Petersen (fiancé Rodrigo), Danielle Frisby (Weslee), Britton Cram (Erik), and Dylan Petersen; Abby Parish and Bridget and Liam Hogan. Five great-grandchildren: Chloe, Cache, and Hazel Frisby and Denver and Roseleigh Cram, with baby boy Frisby expected in September. Also survived by sister-in-law Marlene Johansen and brother-in-law Donald Mecham. She was preceded in death by her parents; her parents-in-law, Lewis & Gladys Johansen; and her three sisters, Jeanine Mecham, Margaret Ann Anderson, and Joan Vigh. We are comforted to know she is now having a joyous reunion with these beloved family members. A viewing will be held on Monday, May 14, from 6-8 pm at the Nelson Funeral home at 162 East 400 North in Logan. Funeral Services will be at noon on Tuesday, May 15, at the Hyrum 15th Ward at 455 East 100 South in Hyrum, with a viewing from 10:30 to 11:30 am before the service. Interment will follow at the Hyrum City Cemetery.

LuDean Clossner Johansen, 82, passed away peacefully on May 9, 2018, after a short illness. She was born on January 24, 1936, in Logan, Utah, the third of four daughters born to Herman and Alice Luella Hansen Clossner. Both of her parents passed... View Obituary & Service Information

The family of LuDean Clossner Johansen created this Life Tributes page to make it easy to share your memories.

LuDean Clossner Johansen, 82, passed away peacefully on May 9,...

Send flowers to the Johansen family.