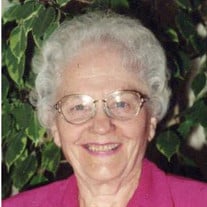 LuGene Cole Sorenson, 88, passed away on Sunday, Feb. 1, 2015 at the Logan Regional Hospital, with family by her side. LuGene was born on May 16, 1926 in Fairview, Idaho to Leslie John Cole and Louie McKinnon Cole. She was the third of five children. She was born at home in the farmhouse built by her grandfather. She grew up in Fairview, attending the 4 room schoolhouse just up the road. She then graduated from Preston High School. While in high school she met Bryan Garnell Sorenson and after he returned from serving in the Navy they were married on Nov. 21, 1947 in the Logan LDS Temple. They moved to Logan so Bryan could attend USU and lived in one half of a Quonset hut apartment on campus. They moved to American Fork where their daughter Linda was born, and eventually returned to Logan where they have lived since. LuGene was a wonderful homemaker, always making her home clean and beautiful. She liked to sew, read, garden, and visit with family. When Bryan started his own business, she was invaluable in helping him do the bookwork, secretarial duties, and even helping on the machines if needed. She had a kind heart and would do anything for everyone. She was generous with her time and talents. As a member of The Church of Jesus Christ of Latter-Day Saints, she held many callings as a longtime resident of the Logan Ninth Ward. She served as Primary president, Young Womans president, Relief Society president, counselor in the stake Relief Society, and in many other positions. She is survived by her husband of 67 years, Bryan Garnell Sorenson, her daughter Linda Gillespie of Logan, grandson Matthew Gillespie, Plantation, Florida, granddaughter Teresa Scheurich, WVC, Utah, and 5 great grandchildren, Joey, Daria, Lillian, Sophie, and Evelyn. She is also survived by 2 sisters, Gay Cole of Taylorsville and Shelly (Darrell) Manning of Boise, Idaho, as well as many in-laws, nieces and nephews. She was preceded in death by her parents, a brother Donald M. Cole and a sister and brother in law Nedra and Wendell Eames. Funeral services will be held at Nelson Funeral Home, 162 East 400 North, Logan on Saturday, Feb. 7, 2015 at 12 noon. A viewing will be from 10 to 11:30 a.m. prior to the services. Interment will follow the service at Logan City Cemetery. The family would like to thank Dr. Jeffrey Huffman and the nurses at Logan Regional Hospital Medical unit, TCU, and ICU for their unfailing care and kindness during the past month. She has been greeted by many family members, and she will be waiting to see us all again soon. Condolences may be sent to the family online at www.nelsonfuneralhome.com.

LuGene Cole Sorenson, 88, passed away on Sunday, Feb. 1, 2015 at the Logan Regional Hospital, with family by her side. LuGene was born on May 16, 1926 in Fairview, Idaho to Leslie John Cole and Louie McKinnon Cole. She was the third of five... View Obituary & Service Information

The family of LuGene Cole Sorenson created this Life Tributes page to make it easy to share your memories.

Send flowers to the Sorenson family.