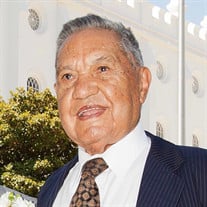 Luis Francisco Calvimonte died peacefully in his sleep on March 1, 2021 in Bountiful, Utah at the age of 97. Luis was the last child of eight born to Primitivo and Maria Calbimonte in Potosí, Bolivia on September 20, 1923. Luis knew the meaning of hard work. From a very early age, he worked in his father’s mines. He also spent a lot of time on his parent’s farm, “La Gran Peña” near Potosí, where he would tend to the grazing sheep and help with other farming responsibilities. His love for the outdoors and animals in their natural habitat started here. While there, he learned the indigenous language Quechua, which he spoke well. He attended high school at Colegio Americano in La Paz, a school run by the Methodist church there, where he became proficient in the English language, a skill that would serve him well throughout his career. He nurtured his love for learning throughout his life and was an avid reader. Later in life his sight declined, but that didn’t deter him from his love for books. He would get Talking Books from the public library, and would always discuss his latest topic of learning with whomever was visiting—often playing his favorite parts of the book to his guests. In his 90s, his favorite topics were quantum physics and history. Luis took his knowledge from working in his family’s mines and had a long career as a mining engineer at Cobana. This career would help him to travel the world. He loved learning about other peoples, admiring their cultures and traditions. While traveling, he would often enjoy his favorite pastime of golfing. He obtained pins from each new country that he golfed in, and had a collection featuring pins from over 30 different countries. At a mining conference he attended in Salt Lake City, he was taken on a tour of northern Utah that included USU in Cache Valley. Cache Valley left such an impression on him that when it was time to retire at age 60, he relocated his family there, where he spent the majority of the rest of his life. He had a free and adventurous spirit that more often than not got him into trouble, but also gave him endurance and helped him cope with everyday living. He loved to exercise, walk, practice yoga, and was physically active well into his 90s. He especially enjoyed going dancing at the Cache County Senior Citizens Center. He valued his independence and was often seen in the community during various outings—at age 96, he was still riding the public transportation system and walking to the grocery store! Luis taught his children the importance of living life to its fullest, to travel often, and to take advantage of every minute of life. Luis was preceded in death by his parents, his brothers and sisters, and three of his children: Marcela Calbimonte, David Antonio Calbimonte, and Lilia Isabel Calbimonte. He has seven surviving children: Martha Hill-Calbimonte, María Teresa Calbimonte, Bernadette Calbimonte, Alvaro Calvimonte, Jorge Calvimonte, Carlos Calbimonte, and James Calvimonte. He has thirteen grandchildren: Ana Hill, Joe Hill, Ralph Wheeler, Luis Galindo, Miguel Caceres, Darma Saavedra, Rodrigo Calbimonte, Mauricio Calbimonte, Brianna and Quinn Calbimonte, and Mila, Desmond, and Simon Calvimonte. He also has three great grandchildren: Valentina Martínez, Mateo Martínez, and Luna Calbimonte. His cremation will take place on March 4th, and his ashes will be interred at the Calvimonte Family mausoleum in Potosí, Bolivia. An intimate, private memorial service will be held with family and friends, at a date to be determined. In lieu of flowers and in honor of Luis, please support your local Senior Citizens Center.

Luis Francisco Calvimonte died peacefully in his sleep on March 1, 2021 in Bountiful, Utah at the age of 97. Luis was the last child of eight born to Primitivo and Maria Calbimonte in Potosí, Bolivia on September 20, 1923. Luis knew the meaning... View Obituary & Service Information

The family of Luis Francisco Calvimonte created this Life Tributes page to make it easy to share your memories.

Luis Francisco Calvimonte died peacefully in his sleep on March...

Send flowers to the Calvimonte family.