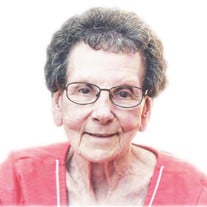 Lynette N Hall, 84, peacefully passed away on January 4, 2016 at the home of her niece, Cynthia Thompson, who had been caring for her for the past 4½ years. Lynette was born in Garland, Utah on May 21, 1931 to Otto Eugene Hall & Leona Grace Nish. Her family moved to Logan when she was very young. Lynette graduated from Logan High in 1949. Aunt Lynette served in the Women's Air Force from January 2, 1952 to May 11, 1955. She was stationed in the United States and Wiesbaden, Germany, where she worked in the Airman Manning branch. She was an active member of the LDS church and served in The Northern States Mission from August 24, 1955 to February 28, 1957. She served as a Family History missionary in Salt Lake City from July 8, 1993 to June 24, 1994. She also served in several other church callings including Relief Society President. Aunt Lynette lived in Palo Alto, California until April 1992 when she moved to Salt Lake to live with her sister, Verda. While in California she was employed at Stanford University in the Undergraduate Admissions Office for 8 years, and then was appointed an Assistant Dean of Graduate Studies, supervising the Graduates Admissions Office. Aunt Lynette loved to travel, read, eat Snickers, snuggle babies, and pamper her Scotty dogs. She also loved classical music, especially opera. Even in the middle of her trials & challenges, she never lost her great sense of humor, and managed to entertain us all with her quick wit. Aunt Lynette was preceded in death by her mother and father and a sister and brother-in-law Joyce and Ervin Lehman. She is survived by 2 sisters and a brother-in-law, Verda Baugh, and Deanna and Gary Morse. She is also survived by many adoring nieces and nephews & great-nieces and nephews who she has taken under her wing, and treated as though each were her own. We want to extend a special thank you to Rocky Mountain Hospice, especially Matt and Karl (her nurses), and Dr. Vera Carlson. We would also like to thank Dr. Grover and Dr. Steve Salisbury, and Charlotte Maughan, Kelli Sharp, Sarah Buttars, & Luke Thompson who also helped care for her. Funeral services will be held on Saturday, January 9th at noon at the Nelson Funeral Home, 162 East 400 North, Logan, Utah. There will be a viewing from 10:30 until 11:30. Burial will be in the Logan City Cemetery. Aunt Lynette was an elect lady who earned her place in Heaven through her Christ-like service to all who came in to her life. We love and miss you Aunt Lynette. Until we meet again .... Condolences and memories may be shared online at www.nelsonfuneralhome.com

Lynette N Hall, 84, peacefully passed away on January 4, 2016 at the home of her niece, Cynthia Thompson, who had been caring for her for the past 4½ years. Lynette was born in Garland, Utah on May 21, 1931 to Otto Eugene Hall & Leona Grace... View Obituary & Service Information

The family of Lynette N Hall created this Life Tributes page to make it easy to share your memories.

Send flowers to the Hall family.