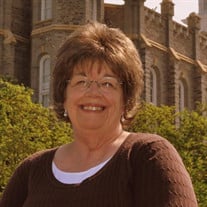 Margaret Irene Cooper 76, passed away from this life peacefully in her home on December 1, 2020. She was born June 16, 1944 in Lynwood, California to Leon Stewart and Margaret Ann Barrett Cooper. The first of four children, she was given the nickname of Mic (Margaret Irene Cooper) by her doting aunts and uncles. She was the little darling of the family. Her siblings include Dan Cooper (Debbie) Clarkston, Melinda Zamzow (John) Reno Nevada and Joe Cooper (Miriam) Clearfield. Irene attended Compton, California public schools where she was active in service organizations and student government. In 1960, she was elected secretary of the student body. While a teenager, Irene was a member of a Polynesian song and dance troupe. This group was comprised mostly of Pacific Islanders but Irene was selected to join them. The Troupe performed for luaus, parties and festivals in the Southern California area. Irene graduated from Compton High School in June 1961. That same year, despite her heart being in California with her dear friends, the family moved to Smithfield, Utah. She often felt unduly uprooted in the prime of her youth. It is interesting to note that Irene stayed in touch with many of her High School friends, often traveling to California for reunions with them. Lately, she's participated in Zoom meetings with her crew where chatting and laughter prevailed. While working at a local grocery, Irene fell in love with and married James Arnold Hansen of Providence. They were blessed with four beautiful children. Jeff (Cherie) Providence, Rod (Cami) Nibley, Mike (Jodie) Henderson, Nevada and Amanda Brozovich (Steve) York, Nebraska. She also leaves four grandchildren, Jason, Brittany, Tyson and Janine and six great grandchildren. Irene and Jim were later divorced. While raising the family, Irene supported her kids in the school and recreational activities they enjoyed. She has always been their biggest fan and forever will be. She enjoyed going to the movies, cook-outs with family and friends and relaxing with a good book. Music, particularly choral singing and performing arts were in her DNA. She has performed in community theater and local musical concerts. Her dedication to music was evident as she enhanced her talents with both voice and piano lessons. Irene’s home was not just a house, it was a place of refuge, nurturing and love for members of her family. Irene was a member of the Church of Jesus Christ of Latter Day Saints. She served in various capacities and offices including Sunday School and Primary teacher, music chorister and Relief Society Presidency. She was also an avid temple patron. Her testimony of The Savior was an essential part of her daily life. At the time of her passing, Irene was employed by Call Center Plus. She loved her co-workers and they will miss her. Irene will be greatly missed and remembered for her strength, perseverance, kindness, good humor, sweet and loving nature and devotion to her family. A rememberance gathering will be held Saturday, December 12, 2020 from 4 to 6 pm at Nelson Funeral Home, located at 162 E 400 N Logan, Utah. All friends and family are welcome. Interment will be held at a later date.

Margaret Irene Cooper 76, passed away from this life peacefully in her home on December 1, 2020. She was born June 16, 1944 in Lynwood, California to Leon Stewart and Margaret Ann Barrett Cooper. The first of four children, she was given the... View Obituary & Service Information

The family of Margaret Irene Cooper created this Life Tributes page to make it easy to share your memories.

Margaret Irene Cooper 76, passed away from this life peacefully...

Send flowers to the Cooper family.