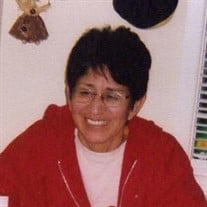 Our beloved wife, mother, grandmother, sister and friend, Margaret Mendoza Herrera, age 70, of Lewiston, passed away peacefully at her home, after an extended illness, surrounded by her adoring husband and family. She was born February 8, 1945, in Mesa, Arizona, a daughter of Gustavo and Maria Herrera Mendoza. As a young girl she learned the value of hard work and followed her family to Montana, and Idaho, chasing jobs as migrant farm laborers, before settling in Franklin, Idaho. While there she met the love of her life, Francisco (Frank) M. Herrera, they were married on February 17, 1966. They lived in Bethlehem, PA for 8 years before making brief stays in Logan, Utah and Preston, Idaho then finally making their home in Lewiston, Utah for the past 39 years. She worked at various places including Del Monte, Saddleman’s, and she retired from Pepperidge Farms after 22 years. Margaret was active in the Roman Catholic Church and served in numerous ministries alongside her husband. She was natural caregiver who over the years welcomed relatives into her home to care for when they were ill or recovering from a surgery. Margaret loved her family and is survived by her husband, Frank; two children; Christina (Robert, Jr.)Martinez and Abel Herrera; two grandchildren; Zachary and Izabella Martinez; two sisters; Dolores and Carmen; two brothers Louis and Michael. She was preceded in death by her parents, a brother, Alfonso and sisters; Margarita, Rose and Frances; and a granddaughter; Elisa Martinez. Funeral Services will be held Tuesday, June 16, 2015 at 11:30 a.m. at St. Thomas Aquinas Catholic Church, 725 South 250 East, in Hyde Park, Utah. There will be a viewing on Monday evening from 6-8 p.m. at Nelson Funeral Home, 162 East 400 North, Logan and at the Catholic Church in Hyde Park on Tuesday one hour prior to services. Interment will be in the Lewiston Cemetery. Special thanks to Intermountain Home Health Care (Hospice), Aquaworx and our wonderful neighbors in Lewiston 4th Ward. Condolences and memories may be share with the family on line at www.nelsonfuneralhome.com

Our beloved wife, mother, grandmother, sister and friend, Margaret Mendoza Herrera, age 70, of Lewiston, passed away peacefully at her home, after an extended illness, surrounded by her adoring husband and family. She was born February 8, 1945,... View Obituary & Service Information

The family of Margaret Mendoza Herrera created this Life Tributes page to make it easy to share your memories.

Send flowers to the Herrera family.