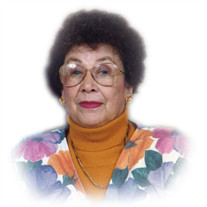 Margaret Fackrell Jardine, 88, passed away on October 16, 2014 at The Legacy House of Logan. She was born to Everett & Edna Fackrell on April 11, 1926 in Trenton, Utah. She graduated from North Cache High School in 1944. On September 19, 1944, she married Ira D. Jardine in the Logan LDS Temple and together they raised four daughters. She loved sewing, crocheting, reading, writing poetry, gardening and sitting in the warm sunshine. She received her CNA Certification and worked at the Franklin County Nursing home and later worked as a Title I Aid and Assistant Librarian at the Media Center at Lewiston Elementary for 4 years. After her husband retired, they worked at Yellowstone National Park for 12 summers where they made lifelong friends from all over the United States. Margaret served in many callings for the LDS Church and especially loved serving in the Primary and Young Women Programs. She was also a member of the Daughters of Utah Pioneers. She was preceded in death by her husband, her parents, a sister, Virginia Duce and a brother, Lewis Fackrell. She is survived by her daughters, Judy Dennis Clark of Boise, ID; Margie Dean Archibald of Clarkston, UT; Jann Boyd Pugmire of North Logan, UT and Nancy Martell Lowe of Paradise, UT. She is also survived by her brother Jay Fackrell of Honolulu, HI, 10 grandchildren and 27 great grandchildren. Funeral services will be held on Monday, October 20, 2014 at 11:00 a.m. at the Clarkston 1st Ward Church located at 25 East 100 South in Clarkston, UT. Friends and family may call on both Sunday, October 19th from 6:00 to 8:00 p.m. at the Nelson Funeral Home, 85 South Main Street in Smithfield, UT and Monday, October 20th at the Clarkston Church from 9:30 to 10:30 am. Special thanks to Dr. Brian Carlson and staff, the staff at Legacy House of Logan and Encompass Home Health and Hospice.

The family of Margaret Fackrell Jardine created this Life Tributes page to make it easy to share your memories.

Send flowers to the Jardine family.