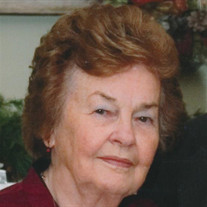 MarGene Nielsen Yeates passed away December 16, 2015, in Logan, Utah. She was born on June 16, 1926, in Newton, Utah, to George Marvin and Melba Sparks Nielsen, the oldest of five children. She grew up in Hyrum and graduated from South Cache High School, where she met her husband, Clyde K. Yeates, while playing in the band. MarGene and Clyde were married on July 27, 1945. They raised six children: Kerry (Marilynn), West Valley City; Randall (Rebecca), Brigham City; Nedra Pace (Dee), Willard; Lori Schaub (James), Benson; Corwin (Rita), Hyrum; and Steven (Cynthia), Millville. Jennifer Shotgunn, a foster daughter, later joined the family. MarGene resided in Hyrum almost all of her life, except for three years in Nampa, Idaho. She was an active member of the LDS Church, serving as Relief Society, Young Women and Primary President, and as a Visiting Teacher and Ward Choir member until she was 87. MarGene worked at a variety of jobs, including Fred’s Flowers, Sew Easy Industries, MiniWorld, as well as assisting Clyde in several businesses. She was an accomplished seamstress and avid gardener, maintaining a large yard and flower garden up until the time she moved to Assisted Living, Clyde passed away in 2008, and she missed him greatly. She is survived by her children, 26 grandchildren, 25 great-grandchildren with two more expected, her sister Carol Jessop, Hyrum, and brother Farrell Nielsen, North Logan. She was preceded in death by her parents, husband Clyde, great-granddaughter Kenna Casselmann, brother Alvoid Nielsen and Sister Elaine Bullen Funeral services will be held in the Hyrum Sixth Ward chapel, 455 East 100 South, Hyrum, at 12:00 on Wednesday, December 23rd. Viewings will be held at the Nelson Funeral Home, 162 E 400 N, on Tuesday, December 22nd from 6 to 8 pm and prior to the services in Hyrum at 10:30 to 11:30. Interment will be in the Hyrum City Cemetery. Condolences and memories may be shared online at www.nelsonfuneralhome.com. The family would like to thank the staffs at Terrace Grove, Sunshine Terrace Rehab, Legacy House, and Dr. Richard Stevens for their care of our mother, as well as Anna with Hospice and the many friends and neighbors that have looked out for her.

MarGene Nielsen Yeates passed away December 16, 2015, in Logan, Utah. She was born on June 16, 1926, in Newton, Utah, to George Marvin and Melba Sparks Nielsen, the oldest of five children. She grew up in Hyrum and graduated from South Cache... View Obituary & Service Information

The family of MarGene Nielsen Yeates created this Life Tributes page to make it easy to share your memories.

Send flowers to the Yeates family.