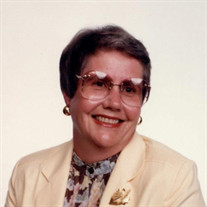 Maridene Mather Rock Hansen passed away peacefully in her sleep at her residence in Logan on Sunday December 19th 2021. Born to Nathan and Mary C. Mather on November 5th, 1937, in Logan Utah. Maridene spent her childhood growing up on the family dairy farm in Smithfield. The eldest of four, Maridene wasn’t afraid to work. In her earliest years she spent time with her father hauling milk from all the neighboring farms to Amalga. She spent much of her time with her mother, aunts and grandma learning to grow a garden, cook, can, quilt and knit. She was actively engaged in her church and made many friends from her home ward and the neighboring wards. During her school years she helped with school plays, operas and even participated in speech class debates on the need for the civil rights movement. Maridene graduated from North Cache High School in 1956 in Smithfield. After high school she attended a few semesters at LDS Business College. In March 1957 she met the love of her life John B. Rock of Paradise and later that year they were married in the Logan temple on September 12. Together they have 4 boys, Jeff (Melanie) Rock, Jed (Becky) Rock, Jon Ryan (Sue) Rock and Shane (Cody) Rock, 11 grandkids and 9 great grandkids. When John & Maridene married they purchased an old house in Paradise that John remodeled, and they lived there until 1967 when they moved to Smithfield to help Maridene’s parents with the family farm. That same year they built their home in Smithfield that Ryan and Sue live in today. In 1971 they bought the family farm from her father. They spent many happy years together farming the land and raising their 4 rowdy boys. They spent much time with family and especially enjoyed Christmases together. On December 7th, 1983, after two massive heart attacks John passed away: leaving behind Maridene and their young family. With hard work and lots of gumption Jeff & Ryan worked the farm for their mother, she turned the farm over to them about 16 years later and they’ve kept the family farm alive and thriving to what it is today. Maridene worked at the Cache Valley Dairy in Amalga for a period and enjoyed the friendships made there. After John’s passing Maridene found companionship with her old school friend Sidney J. Hansen and on February 18th, 1989, they married. Sidney had 5 children of his own. Maridene and her youngest son Shane moved in with Sid at his home in Amalga. Over the years together Maridene and Sid traveled the world. They visited Washington DC, New York City, Delaware, Nauvoo, Canada, Hawaii, Argentina, Norway, Denmark, Sweden, and Alaska just to name a few! They also enjoyed attending many concerts and events across Utah and especially loved basketball games. Maridene’s greatest joy in life was her grandchildren. She could be found at every dance recital or competition, softball, baseball, basketball and football games that her grands were involved in. She was very supportive and was their greatest cheerleader in all things. She was the grand matriarch of our family and will be dearly missed by all. Maridene was preceded in death by her parents, Nathan & Mary C. Mather, husband John B. Rock, husband Sidney J. Hansen and grand-daughter Brittney Ann Rock. A public viewing will be held Monday December 27th from 6-8pm at Nelson Funeral Home 162 E. 400 N. Logan. Funeral services will be held Tuesday December 28th at Noon at the Amalga LDS Church at 6521 N. 2400 W. with a viewing at the church beforehand from 10:30-11:30 am. She will be laid to rest with her sweetheart John at the Smithfield Cemetery. The family would like to extend a special warm thanks to the staff at Terrace Grove assisted living for their care of Maridene in her last years of life. Funeral services may be viewed live using the following link. Password "Hansen" https://us02web.zoom.us/j/84375779739?pwd=b0hjTEovYjRkUGtycndZaGE5UjZmZz09

Maridene Mather Rock Hansen passed away peacefully in her sleep at her residence in Logan on Sunday December 19th 2021. Born to Nathan and Mary C. Mather on November 5th, 1937, in Logan Utah. Maridene spent her childhood growing up on the family... View Obituary & Service Information

Maridene Mather Rock Hansen passed away peacefully in her sleep...