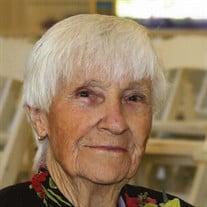 Mrs. Marie Camille Antoinette Gaillard DeBruin died on February 3, 2016, at the home of her daughter, Barbara in Mendon, Utah. Where in the loving care she spent the last three years of her life. She was 93. She was born on July 15, 1922 in Verdun, France to Georges Emile Gaillard, and Antoinette Colson Gaillard. She grew up in France. At the age of 13 she was orphaned and had to fend for herself. She was taken in by a foster family at 14, and helped them to run their bar and restaurant. At the age of 16 she witnessed the horrors of WW II. Toward the end of the war, she worked in a displaced persons camp where she met Adrianus Gerardus DeBruin, a young Dutchman that was a survivor from a Nazi work labor camp. They were married on July 2, 1945 in Verdun, France, and later sealed in the Salt Lake City Temple in 1956. She, her husband, along with their 3 young boys immigrated to the United States in 1954, and became citizens of this great country shortly after. Her last two children were born in the United States. Marie was an avid gardener, she could bring anything back to life if it grew in the dirt. Mom was a beautiful knitter, she knit baby booties for the humanitarian services of the LDS Church. She also knit many hats and mittens for her family, and clothes for her babies. She was also a very good cook, her family and friends benefited from all the great meals and goodies that she baked and shared. She was often invited to show the students of Sky View High how to make French food. The LDS missionaries would often stop at the DeBruin home knowing they wouldn't go away hungry or thirsty. Mom always had some cookies and Kool-Aide on hand, or she had a full course meal ready to eat. She was a very kind and gentle soul until you made her mad, and then wooden spoons, or soup ladles would go flying. Her son saw one coming, ducked, and it went through the large picture window of her home. Dad was very angry both at Andre and mom. Mom was a very hard worker, and helped her children to learn that work ethic. She served a mission for the LDS church in Paris, France with her husband, and when they came home, they worked in the Logan LDS Temple for many years until her health wouldn't allow her to continue. Mrs. DeBruin was preceded in death by her husband Adrian G. DeBruin, a son Alan Georges DeBruin, and her son-in-law Richard Mark Bouse. She is survived by sons, daughter, and daughters-in-law: Andre Jean Marie (Julie) DeBruin, Alma Moroni (Nancy) DeBruin, Emmanuel Nephi (Joni) DeBruin, Barbara Lucienne Alexandrine DeBruin Bouse, and daughter-in-law Heidi DeBruin- Lundberg (Rod Lundberg). Grandma is survived by 30 grandchildren and '32 great grandchildren with 2 more arriving this spring. She will be greatly missed by all who knew and loved her. She was the last of her family, her brothers, sisters, and parents all preceded her in death. The family would like to thank Community Nursing. Services for the excellent care toward mom, especially Carol her nurse, Christine, Tammy, LaNae, and Amy her caregivers, and her doctor D. Barton Avery M. D. The family would also like to thank the women of the Mendon First Ward who gave so unselfishly of their time to help with her care as well. The funeral will be held on Friday, February 12, 2016 in the Mendon Stake Center at 12:00 pm with Bishop Alan Harker officiating, a viewing will be held on Thursday, February 11, 2016 from 6-8pm at the Nelson Funeral Home, 162 East 400 North in Logan, Utah, and one hour prior to the funeral in the LDS Mendon Stake Center 460 South 100 East, Mendon Utah. Burial will be in the Mendon City Cemetery. In Lieu of flowers, please make your donations to the Missionary Fund of the Church of Jesus Christ of Latter-day Saints. Condolences and memories may be shared with the family online at www.nelsonfuneralhome.com

Mrs. Marie Camille Antoinette Gaillard DeBruin died on February 3, 2016, at the home of her daughter, Barbara in Mendon, Utah. Where in the loving care she spent the last three years of her life. She was 93. She was born on July 15, 1922 in... View Obituary & Service Information

The family of Marie Camille Antoinette Gaillard DeBruin created this Life Tributes page to make it easy to share your memories.

Send flowers to the DeBruin family.