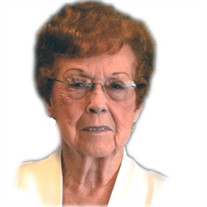 Marie H. Egan Nibley: Marie Hancock Egan, 88, passed away on Tuesday, June 10, 2014 at her home. Marie was born in Toledo, Ohio on August 2, 1925. She was adopted at a young age by Jacob Alonzo and Rozella Tyler Hancock. She grew up and graduated from High School in Arizona. After High School she met Paul Claine Egan and they were sealed in the Mesa Arizona Temple. Paul was in the military so they lived in many places. They had four children; three sons and one daughter, who passed away at the age of 11. Her sons David, Michael and Greg are still living. Marie was a wonderful seamstress, she worked at Logan Knitting Mills and also as a cook at the Bluebird Restaurant and later worked in the school lunch program. She was an active member of the Church of Jesus Christ of Latter-day Saints and had many callings in the church. Marie and Paul served an LDS Mission in the London England Temple and Marie and Paul also worked in the Logan Temple. Marie was a very kind and giving person and a good example to all she associated with. She was preceded in death by her parents, siblings, and her husband Paul Claine Egan, her daughter Pauline Egan, her daughter-in-law Patty Yeates Egan and her granddaughter Ariel Egan. She is survived by her sons, David Egan, Nibley; Michael Kristie Egan, Reno, Nevada and Gregory Annette Egan, Florida. 12 Grandchildren and 26 great grandchildren. Funeral services will be held at 11:00 a.m., Monday, June 16, 2014 in the Nibley 5th Ward Chapel, 3701 South 450 West, Nibley. A viewing will be on Sunday evening, May 15, from 6-8 p.m. at the Nelson Funeral Home, 162 East 400 North, Logan and at the Church on Monday prior to services from 9:30-10:30 a.m. Burial will be in the Logan City Cemetery. Condolences and memories may be shared online at www.nelsonfuneralhome.com

Marie H. Egan Nibley: Marie Hancock Egan, 88, passed away on Tuesday, June 10, 2014 at her home. Marie was born in Toledo, Ohio on August 2, 1925. She was adopted at a young age by Jacob Alonzo and Rozella Tyler Hancock. She grew up and graduated... View Obituary & Service Information

The family of Marie Hancock Egan created this Life Tributes page to make it easy to share your memories.

Send flowers to the Egan family.