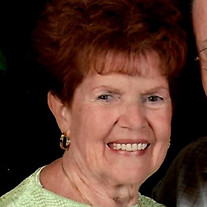 Our beloved mother, grandmother, great-grandmother, sister, aunt and friend has transcended to the shores of her heavenly father’s home to receive newness in life and body, re-unite with old friends and most of all be in the arms of her life’s love and dedicated husband, Arlen. Early in the morning of April 29, 2017, she slipped quietly away in her sleep, with her daughter by her side at her home in Sun City West, AZ. Marilyn was born and raised in Logan, Utah on January 30, 1940 to Ellis Loveland and Elaine Seamons. Her first job was working in the family’s Arctic Circle peeling potatoes. Marilyn graduated from Logan High School and moved to Salt Lake City where she attended cosmetology school and stayed at the Bee Hive House. She snuck out at night to date her best friend’s brother, Arlen, after “stalking” him for a few years. Having earned her degree in cosmetology, she moved back to Logan where she and Arlen were married on July 6, 1959, and she worked as a beautician. She helped put Arlen through school, earning her PHT (Putting Him Through) degree. When Arlen accepted a job with Ford Motor Company, they moved to Detroit and she worked as a waitress. Marilyn was blessed to have Arlen’s love and dedication for 52 years before he lost his battle with cancer. Marilyn was a kind, loving and generous woman who enjoyed entertaining her friends and was passionate about her family. After Arlen retired, they became “snowbirds,” in Sun City West, AZ. Family and friends were always welcome and were treated as Kings and Queens to five-star accommodations. Their hospitality was legendary. Other interests included SHOPPING, traveling, shopping, cooking, more shopping, playing cards and collecting hummingbirds. Marilyn is survived by her daughter, Kerri Lynn (Lance) Manning; son, Craig Thomas (Kristie) Whittington; grandchildren, Tashina Marie, Joshua Thomas, and Malyssa Elaine Manning; great-grandchildren, Serenity Rose Manning, Kartor Wayne Weber, Arielle Hayzel Abegglen, Emilia Lynn Jackman; sister, JoAnn McCoy; brothers, Coy Hale, Quinn Hale, and David Hale. She is preceded in death by her husband, parents, and sister Jenean (Hale) Burgess and sister-in-law Marilyn (Whittington) Evans. Services will be held at 11:00 a.m. Wednesday, May 10, 2017 at Nelson Funeral Home, 162 E. 400 N., Logan, Utah 84321 (435)752-3261 Viewings will be held from 6 to 8 p.m. Tuesday May 9, and again from 9:30 to 10:30 a.m. Wednesday. In lieu of flowers, the family suggests that memorial contributions be made to the Leukemia and Lymphoma Society at www.lls.org in memory of Marilyn Whittington Burial will be in the Garden City Cemetery (Bear Lake). Condolences may be shared with the family at www.nelsonfuneralhome.com

Our beloved mother, grandmother, great-grandmother, sister, aunt and friend has transcended to the shores of her heavenly father&#8217;s home to receive newness in life and body, re-unite with old friends and most of all be in the arms of her... View Obituary & Service Information

The family of Marilyn Loveland Whittington created this Life Tributes page to make it easy to share your memories.

Send flowers to the Whittington family.