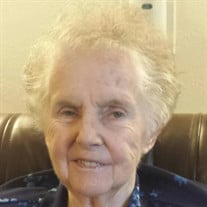 Marjorie Seamons Godderidge of Smithfield, died Sunday, January 29, 2017, in Logan Utah. Marjorie was born March 26, 1937, in Hyde Park, Utah to Henry Stephen Seamons and Ellen Murriel Robbins. She married Charles Andrew Godderidge in the Logan LDS Temple on March 1, 1957. Marjorie lived in Hyde Park until she married and then lived in Smithfield Utah the remainder of her life. She graduated from North Cache High School in 1955. She was a member of the Church of Jesus Christ of Latter-day Saints and served in the church throughout her life. Her service included many callings in her ward and stake. Marjorie also served as a missionary, along with her husband, in the Knoxville Tennessee Mission in 2001 and 2002, and served as a Temple Worker for several years. Marjorie loved music and sang in many church choirs. The most important thing in Marjorie’s life was her family. She was always proud of her children, grandchildren, and great-grandchildren. She cherished the time she was able to spend with each member of her family. She eagerly awaited the birth of each of her grandchildren and great-grandchildren, and she was excited to meet and cuddle each new baby. She taught, through her good humor, faith, love, and most of all her by example, that hard things can be endured well. Marjorie loved flowers and gardening, which could be seen by the many beautiful flower and vegetable gardens she maintained. Even very late in life when she struggled to walk, Marjorie would frequently say “I am going to get out there and weed my garden and prune my grapes.” She is survived by her children: Cathy (Chris) Chlarson of Murrayville Illinois, Scott (Kathryn) of Farmington Utah, Brent (Chelese) of Smithfield Utah, Gary (Beth) of Boise Idaho, Tresa (Mark) Magnusson of Orlando Florida, 22 grandchildren, 23 great grandchildren and her sister Cleo Flemming and her Brother Garold (Lana) Seamons. Marjorie was preceded in death by her husband Charles, her parents, and her brother Don Seamons. The funeral will be held Saturday, February 4, 2017, at 12:00 noon in the Smithfield 11th Ward building, 79 East 200 South, Smithfield, Utah. Viewings will be held Friday, February 3, 2017 from 6:00 to 8:00 p.m. at the Nelson Funeral Home, 85 South Main, Smithfield, Utah and again preceding the funeral on Saturday from 10:30 to 11:30 a.m. in the 11th Ward building. Interment will be at the Smithfield City Cemetery.

The family of Marjorie Seamons Godderidge created this Life Tributes page to make it easy to share your memories.

Send flowers to the Godderidge family.