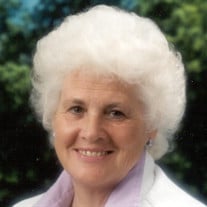 Mary Lucinda Munk Hansen was born in Amalga, Utah on July 15, 1931 and passed away peacefully on February 21, 2019 in Rexburg, Idaho. She was 87 years old. Lucinda was the daughter of Harvey Leo and Eva Valate Kirkbride Munk. She was the youngest... View Obituary & Service Information

The family of Mary Lucinda Munk Hansen created this Life Tributes page to make it easy to share your memories.