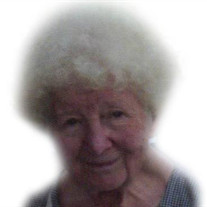 Our beloved Mother, Grandmother, Great Grandmother, Sister, and Friend returned to our Heavenly Father March 8, 2016. She was born March 25, 1929 in Logan, Utah to Leonard and Sarah Buttars. Maurine was the oldest of six children, three brothers and two sisters. She spent her life in Clarkston. She attended school in Clarkston, Smithfield, North Cache High School, and Utah State University. Maurine married Dale Godfrey on May 12, 1949 in the Logan Temple. They enjoyed 57 happy years together and were blessed with five children. Mom enjoyed having her family around her. She loved nature, traveling, bird watching, was an avid reader, and loved painting. She worked harvesting vegetables and in a turkey plant, enjoyed making maps for the A.A.A. of the land in the county, and in the Clarkston Post Office. Maurine was an active member of the Daughters of the Utah Pioneers for many years. She was a member of the Church of Jesus Christ of Latter Day Saints holding many church callings throughout her life. She is survived by her five children Khalil (Sheri) Godfrey, Sheila Ballard, Kyle (Tena) Godfrey, Leone (Randal) Hatch, and LaNeita Godfrey, 10 grandchildren, and 12 great grandchildren. Brothers, Norris (Karen) Buttars and Calvin (Renate) Buttars. Sisters, Esther (Norvell) Thompson, Norma Rollins, and Welda Buttars (sister-in-law). Preceded in death by her parents, Dick Buttars (brother), Douglas Ballard (son-in-law), and Jana Godfrey (granddaughter). A special Thank You to the staff at Intermountain homecare-Kelly P., Kim, Intermountain hospice nurse, and Dr. Brian Carlsen who treated our mother with love respect, and dignity. A viewing will be held at Nelson Funeral Home in Smithfield, UT from 6 to 8 p.m. on Friday, March 11th. Funeral services will be held at noon at the Clarkston Church with a viewing from 10:30 to 11:30 a.m. prior to the services. Burial at the Clarkston Cemetery. Condolences may be sent to the family online at www.nelsonfuneralhome.com.

Our beloved Mother, Grandmother, Great Grandmother, Sister, and Friend returned to our Heavenly Father March 8, 2016. She was born March 25, 1929 in Logan, Utah to Leonard and Sarah Buttars. Maurine was the oldest of six children, three brothers... View Obituary & Service Information

The family of Maurine Buttars Godfrey created this Life Tributes page to make it easy to share your memories.

Send flowers to the Godfrey family.