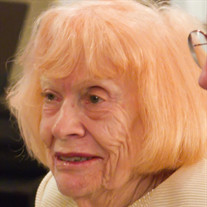 Maxine Anne Harwood Clayson, 85, passed away peacefully on April 1, 2016. She was born on December 12, 1930 in Smithfield, Utah to Oscar William Harwood (born in Shipdham, England) and Anna Nielsen (born in Hjorthede, Denmark). She was very proud of her ancestry and particularly passed down to her family a love of Denmark, her Danish relatives, and the culture, food and traditions of that country. She loved to travel, and some of her most treasured memories were her trips to Europe, especially to visit the lands of her parents. She attended North Cache High School in Richmond, Utah where she met Reed Lamar Clayson of Cornish, Utah. They were later married in the Salt Lake City Temple when both were attending Utah State University. The family lived all over the country starting in El Paso, Texas; then Manhattan Beach, California; Anaheim, California; Falls Church, Virginia; Colorado Springs, Colorado; and then, finally, Arvada, Colorado. Maxine was very active with her friends, family civic, and Church activities throughout her life. She ran political campaigns for Republican candidates in California and Colorado. She supervised elections and was the head of the Orange County Women's Republican Organization. While in Colorado, she worked as a volunteer for LDS Social Services assisting unwed mothers as well as serving in the Denver Temple. She was active in book clubs and study groups. She also served volunteer missions for the Church of Jesus Christ of Latter-day Saints serving Hmong and Spanish-speaking branches. She spent her life being active in Church, being a friend to all whom she met, and championing underdogs. Maxine is survived by her husband, the love of her life, and her four children: Mark Harwood of Gardena, California; Valerie Anne of Cody, Wyoming (Jay Winzenried); David Reed of Las Vegas, Nevada (Suzanne Baird); and Carol Anne of Scituate, Massachusetts (Tristan Johnson); twelve grandchildren; and eight great-grandchildren. She was preceded in death by her parents, her brother Don William Harwood, and her sister Doris Harwood Hartvigsen. She will be remembered with a viewing and funeral on Saturday, April 9, 2016 at the Nelson Funeral Home, 162 East 400 North, Logan, UT 84321. Viewing 11:30-12:30, funeral 1:00 p.m., followed by interment in the Smithfield Cemetery, 300 E & Center St. See http://www.nelsonfuneralhome.com/ for arrangements and condolences. In lieu of flowers, the family would appreciate donations for a memorial bench to be placed at the Davis Lane park where there are so many happy family memories at http://seaflux.org/maxine-harwood-clayson-memorial-page.

Maxine Anne Harwood Clayson, 85, passed away peacefully on April 1, 2016. She was born on December 12, 1930 in Smithfield, Utah to Oscar William Harwood (born in Shipdham, England) and Anna Nielsen (born in Hjorthede, Denmark). She was very... View Obituary & Service Information

The family of Maxine Anne Harwood Clayson created this Life Tributes page to make it easy to share your memories.

Send flowers to the Clayson family.