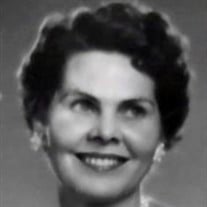 Maxine Wood Fisher (1919-2020) was born in Dayton, Franklin, Idaho, on May 9,1919, the first of 5 daughters born to Anna Johanna Viehweg and Kenneth J. Wood. She passed away in the home of her son, Bruce Fisher, in American Fork, Utah on October 29, 2020 at the splendid age of 101 years. Her parents were farmers in the towns of Dayton and Clifton, Idaho. Maxine grew up with none of life’s modern conveniences. She has lived to enjoy and appreciate many discoveries and advancements in her lifetime. She and her sisters were taught to be hard workers alongside their parents, who were in her words, ‘truly humble, hardworking people.” Maxine attended grade school in Clifton and Dayton, Idaho. When she was a freshman in High School, her family moved to Farmington, Utah for a short time and then moved back to Clifton. She was thrilled to be allowed to stay with her aunts and uncles during the school months so she could graduate from Davis High in 1937. After graduation she went home and clerked in a store in Preston. In 1938 she first met Allen W. Fisher, who did not make a favorable impression on her. However, he was soon in the running as one of her beaus, and he finally nosed out all of his competitors. Allen and Maxine were married and sealed in the Logan, L.D.S. Temple on April 5th, 1939. They had a honeymoon night, and then moved to a rundown farm in Preston where they immediately set up home in a 2-room shell, known to us all as the chicken coop. Since it was spring, Allen began at once preparing the land and planting crops. Allen had borrowed money to buy the farm and a few essentials. No one had previously been able to make a go of it on that land, but with hard work, perseverance, and many hardships, Maxine and Allen did. It was like pioneering to begin with, but they provided a wonderful experience of growing up on the farm for their 4 children. Allen and Maxine were very close and dedicated to their parents and siblings and this provided their family with many delightful, endearing, lasting relationships with grandparents, aunts and uncles, and cousins. They provided a rich heritage for their children. In the year 2009, Maxine had a unique experience and learned that she was blessed with another son, Gene Williams, due to a mix up at the time of his birth. Gene has been a loving, attentive son to her throughout her advanced years and since he became a part of her family. We are so grateful he found us. This has been a remarkable spiritual experience for Maxine as well as for all of her family. Maxine served faithfully in numerous church callings, probably in every capacity and organization. In her later years, she especially enjoyed working in the Logan L.D.S. Temple baptistry for 12 years alongside her sister Fern and her husband Dean. After Allen’s passing on April 17th, 1981, Maxine sold the farm and lived in Salt Lake City for nearly a year. The noise and traffic were too much for her. She moved back home to Cache Valley and lived in her home in Logan from 1982-2019. She claims to have found “heaven” there surrounded and cared for by the best neighbors and friends a person could have, including the neighborhood children who called her ‘grandma.’ Not a day went by without a visit or two, her dear friend reading numerous lessons and books to her, flowers given to her for every occasion, and a goodie or nourishing meal brought into her home. She was spoiled! But only because her friends recognized a truly sweet, happy, remarkable woman. She was blessed with a remarkable life. It’s no wonder she took her time in leaving us. Maxine is survived by 4 children and one daughter-in-law; Anna Lee Richens (St. George, Utah), Emery Gene Williams (Joyce-Herriman, Utah), Bruce Lynn Fisher (Kathy-American Fork, Utah), Helen Gay Rasmussen (Vaughn-Georgetown, Idaho), and Susan Elsa Jensen Fisher (Pocatello, Idaho), as well as 1 sister Kenna Bell (Brigham City, Utah) and 1 brother-in-law Lee Reddington (Brigham City, Utah). Maxine has 21 Grandchildren, 75 Great Grandchildren, and 21 Great, Great Grandchildren. She was proceeded in death by her parents Anna Johanna Viehweg and Kenneth J. Wood, her husband Allen W. Fisher, one son Rodney Allen Fisher, one son-in-law Alan Grant Richens, and 3 sisters and 4 brothers-in-law: Fern and Dean Sears, Naudine Reddington, Patrecia and Norman Beckstead, Toby Winn, and Gene Bell. A graveside service for the immediate family will held on Wednesday, November 4th at the Clifton, Idaho Cemetery. You may join the graveside via ZOOM at 11:00 a.m. at the following link. Join Zoom Meeting https://us02web.zoom.us/j/85923063662?pwd=WFpPT044eU1RclZickxnS0JXSkFxZz09

Maxine Wood Fisher (1919-2020) was born in Dayton, Franklin, Idaho, on May 9,1919, the first of 5 daughters born to Anna Johanna Viehweg and Kenneth J. Wood. She passed away in the home of her son, Bruce Fisher, in American Fork, Utah on October... View Obituary & Service Information

The family of Maxine Wood Fisher created this Life Tributes page to make it easy to share your memories.

Send flowers to the Fisher family.